Opening convocation this fall for NDSU’s performing arts division was one to be remembered. It was the official start of tuba virtuoso Sam Pilafian’s role as visiting artist at NDSU.

He brought about 150 students and faculty members to their feet in Beckwith Recital Hall. They rolled their shoulders and shook out their hands. They took in air, held their breath and blew it out. “There’s a sound to this,” he pointed out as they worked through patterns of breathing.

Everyone opened themselves to it, not the least bit self-conscious about standing shoulder to shoulder, inhaling and exhaling loudly and rhythmically as a group. They focused on their breathing and the ways in which they could control it. Then they performed the “Star Spangled Banner” twice — once just using their breath and breath control and then with their voices, accompanied by Pilafian on tuba.

This is one of the things Pilafian likes about NDSU — people are willing to try things, including arriving on campus early in the morning for what he calls breathing gym. Pilafian leads the musicians, singers and actors through a series of breathing exercises to loosen them up and to teach proper breathing. Practice makes proper breathing automatic, and proper breathing leads to powerful performances. This routine is how Pilafian maintains his fitness as a performer. This routine, he believes, is important for NDSU’s performers. “Daily routines allow creative lightning to strike.” 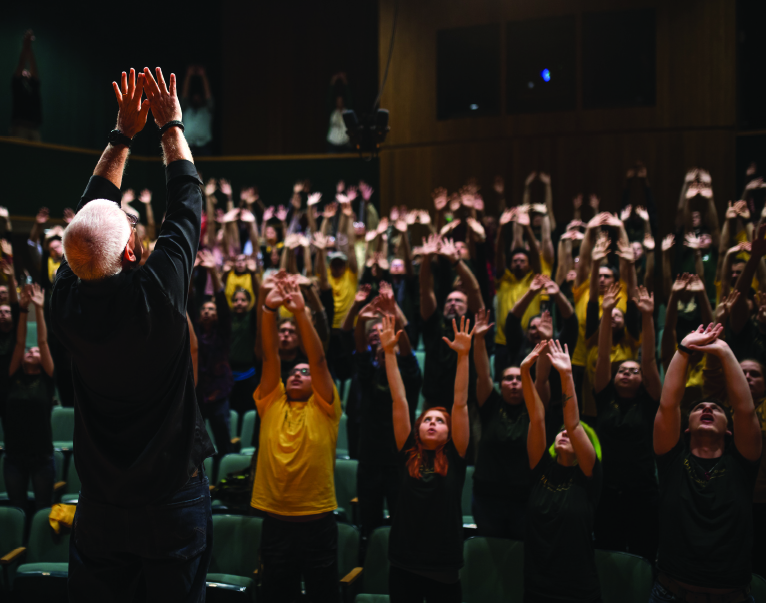 Pilafian loves NDSU. He picked the university for what he calls his last teaching lesson as much as NDSU picked him. He has traveled the world teaching young musicians for 44 years at some of the world’s most prestigious music programs.

His visits to NDSU, most recently when the famed Boston Brass came to perform a concert in fall 2015, stood out. “I couldn’t stop thinking about this place.”

Pilafian saw something special. He saw a school of music at a major research university that had a sense of community and collaboration. He saw a vibrant student body and principled teachers. He saw openness to try new things.

NDSU was where he wanted to try his big ideas for the future of music education, that last lesson he never got to pursue when he retired abruptly from the University of Miami.

He quit because his wife Diann had the opportunity for a potentially life-changing procedure. They had been waiting for this call for 30 years as she dealt with the effects of early-onset Parkinson’s Disease. When the couple learned she qualified for surgery, within three days, Pilafian left his job and they moved to Phoenix, Arizona, to have treatment at the Muhammad Ali Parkinson Center. The procedure was a success.

Pilafian’s ideas for advancing music education were on his mind again, and he knew where he wanted to pursue them.

NDSU students and faculty have the opportunity to work with a renowned musician and teacher whose career has only been on an upward trajectory since he was a teenager. Pilafian was a young man when he caught the attention of Leonard Bernstein and played at the world premiere of Bernstein’s “Mass” at the Kennedy Center in Washington, D.C. He is a founding member of the world-famous Empire Brass Quintet. He has recorded and performed with Pink Floyd, the Boston Symphony Orchestra, Bernadette Peters and the Duke Ellington Orchestra, among many others.

Pilafian is a master with an impressive resume. But what’s most interesting about him is his deep love of music and his insatiable desire to be better. He will try just about anything to improve his artistry.

As a 20-year-old college student, he spent four days living with friend and pianist Mike Gerber, who is blind. By this time, Pilafian was already an accomplished musician who had earned prestigious fellowships from Dartmouth and Tanglewood and performed a solo on “The Ed Sullivan Show.” But he observed his friend’s heightened sense of hearing and the profound effect on his musicianship.

Pilafian decided to bandage his own eyes.

The first day was scary. He was disoriented and wouldn’t leave the room.

The second day was better. He could almost see the room through sound, and he and his buddy spent all their time playing music.

The third day was even better. “I was hearing more and could almost see the world I was not seeing.”

The fourth day brought a breakthrough. Pilafian realized he was truly listening for the first time in his life. He could play back anything Gerber played on the piano.

“Nothing was the same after that.”

Pilafian took those same powers of observation to every city, college and university he visited. He noticed patterns and what was working and not working. He learned things he used to push himself as a music teacher the same way he pushed himself as a musician.

As an individual performer, he can do whatever unconventional thing he wants, like blindfolding himself for four days. The amazing performance is the end game. Trying to influence the status quo of the musical world is a different story.

He co-wrote a book called “The Breathing Gym” outlining the exercises he uses to keep himself and students in top performance shape.

The ideas weren’t new — they were a technique taught by Arnold Jacobs, an orchestral tuba player who was best known as the principal tubist for the Chicago Symphony Orchestra. Pilafian and co-author Patrick Sheridan took his teachings and turned them into fundamentals methods for beginning music students. The idea was to make it fun, so the students would continue playing.

People were skeptical when the book was published 15 years ago. However, the techniques have now been adopted by musicians at every level and are a mainstream part of music education.

Pilafian lives by the old saying about first being ignored, then laughed at, then fought against, before you win. And Pilafian wins in the name of good music and good music education.

The NDSU Challey School of Music, with Pilafian’s help, is engaged in a three-year project to enhance the curriculum and to perhaps create a new model for music education. The faculty have started documenting the process and plan to release findings along the way.

For the next three years, Pilafian will spend several days a month at NDSU and participate in rehearsals and other activities remotely when he’s at home or traveling with the Boston Brass. During his time on campus he attends classes and rehearsals, bringing his insights as a lifelong student of music and 44 years as a college teacher.

He sees music education as too compartmentalized and constantly challenges everyone to find the commonalities between the musical disciplines. “Why don’t singers spend more time with instrumentalists? Why don’t composers talk more with musicologists? Because that is not what is taught,” he says. He theorizes that the more artists see each other and spend time together, the more they will collaborate, which will lead to new ideas, new types of music and new ways of performing.

He spends hours and hours talking with faculty members and students — about their ideas, about the connections they see. “The conversations have been totally interesting,” he said. “They always start with, ‘is this a wild and crazy idea?’” 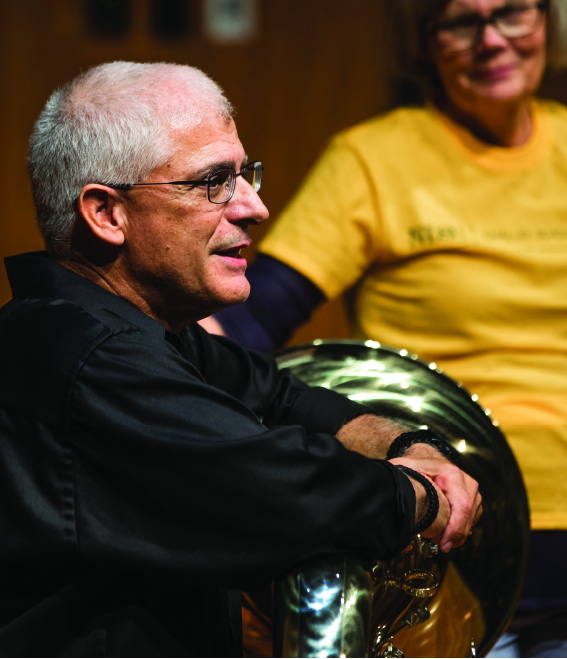