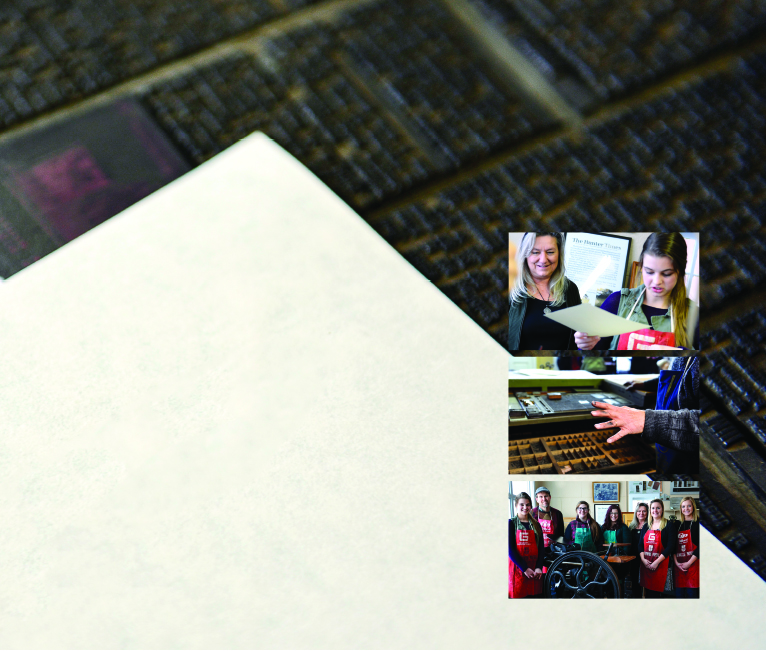 A press for
the plains
and prairies

NDSU Press has a new leader in Suzzanne Kelley, who has set a goal to become a one of the country’s top university presses. She’s making headway, particularly with the need to increase the number of books published. In the previous 67-year history of the press, it has published approximately 60 books. She’ll have published another 13 by the end of 2017.

She’s also made it a teaching press. Kelley teaches publishing classes that give students the full experience of editing and publishing books selected for publication by NDSU Press. A recent class worked on a book of North Dakota Poet Laureate Larry Woiwode’s poems, including printing and finishing the project on old-time equipment. Another class produced a collection of poetry by North Dakota Associate Poet Laureate Denise K. Lajimodiere, also assembled and printed at the Braddock Letterpress Print Museum.

Kelley is assistant professor of practice for the College of Arts, Humanities and Social Sciences. She earned her doctorate in history from NDSU in 2010 and began working with NDSU Press in July 2015, following previous work with a national literary press and four scholarly journals since 2001. She teaches courses in publishing, directs activities of the press, and pursues scholarly research in the Great Plains, Australia, and New Zealand, discovering connections between memory and place. In May 2017 Kelley was elected president of the Midwest Independent Publishers Association, which serves a 12-state region including North Dakota.

She instituted an annual book launching event, and set the date as the first Thursday in March each year.

“We are making great strides toward becoming the press of choice for scholars of the plains and prairies,” Kelley says. The mission of NDSU Press is to stimulate and coordinate interdisciplinary regional scholarship throughout the Red River Valley, North Dakota, the North American plains, and similar regions around the world. NDSU Press is part of the Institute for Regional Studies.