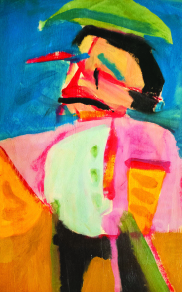 By all means, when you step in front of one of Jim Falck’s paintings, take note of his technical execution, compositional unity, the punch and pop to the way he used color. Consider his expressiveness. Recognize nods to the 19th-century masters — Cezanne, Picasso, Matisse, as well as Diebenkorn from the 20th-century — painters Falck especially admired and studied.

But don’t fail to notice that which can’t be parsed — one man’s profound engagement and pleasure in making art. The romantic myth of the suffering artist has held sway too long in our public imagination. The act of creation insists upon intellect and intuition. Such work, done well and with integrity of spirit, is a robust and renewing undertaking. Imagine Falck, sequestered in his studio, alone with canvas, paints, brushes, and replete in this opportunity at last to focus on the work at hand. 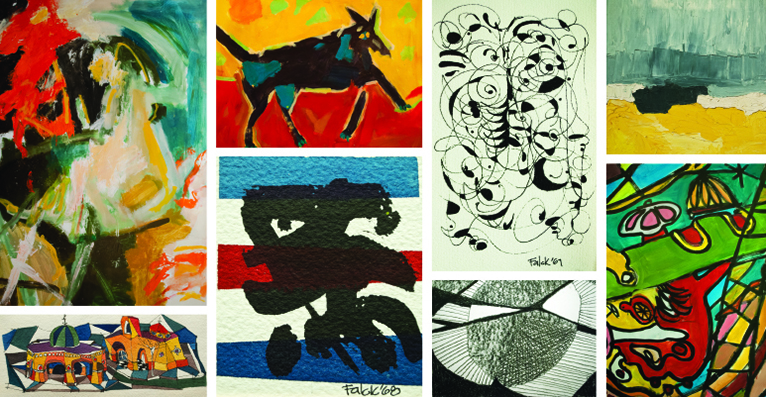 The moment for a determined, uninterrupted conversation with color, texture, line, and balance was a long time coming. Falck had wanted to major in art as an undergraduate in the 1950s. Instead, he followed a more practical pathway as an architect, and later a landscape architect. But, oh, when he retired — well, he made up for lost time. By now, he was living in a large New England house in a town outside Boston. Untethered from the work and career that he had served well, Falck finally became the art student he had wanted to be. He enrolled at the nearby Montserrat College of Art and studied painting, drawing, and art history. He turned his windowless cement-block basement into an unprepossessing studio where he worked prolifically for the next 25 years — at least whenever he wasn’t traveling to Italy, Portugal, Mexico, or Spain to study and paint. It was a good life.

In 2013, Falck, diagnosed with cancer and given only a few months to live, asked his niece, Mary Anne, who is married to NDSU Development Foundation Chair Steve Swiontek, to help him set up an endowment for NDSU art students. A man not given to unduly fussiness over his finances —his checkbook lived in his breadbox and his bond certificates among his tablecloths and napkins — he was truly surprised by his net worth. His gift to the Department of Visual Arts, including endowment and artwork, totaled $3.6 million. With this bequest, he hoped to give aspiring NDSU artists a leg up. Falck, it seems, had never forgotten he had to defer his dream until later in life. Here’s hoping the students who gain from Falck’s generosity discover in themselves something of the man’s spirit, steadfastness, and joy.