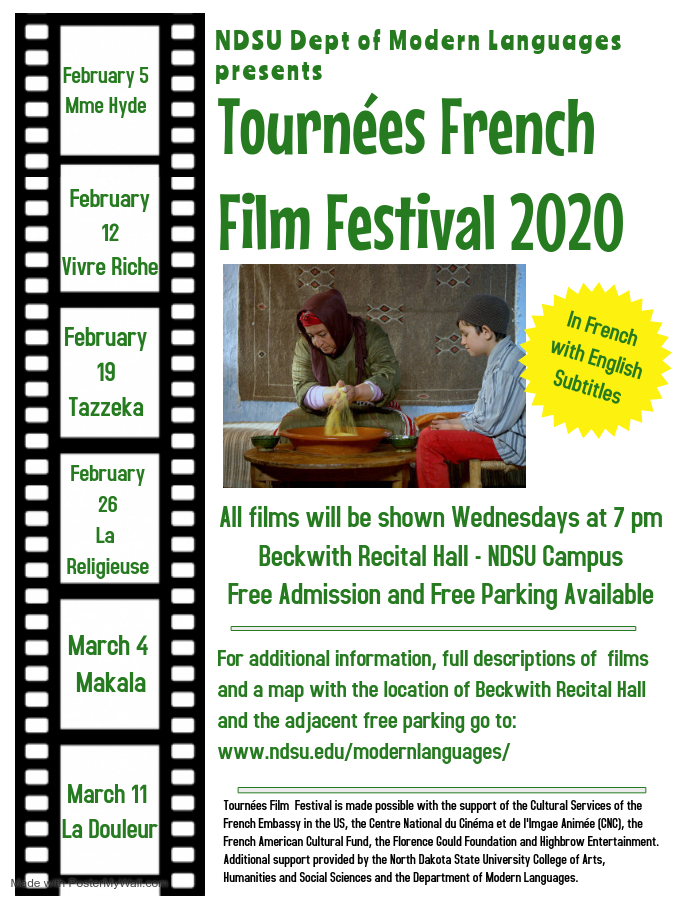 Make Lasting Connections Around the World in Another Language

Sebastián Borensztein / Argentina, Spain / 98 min/ 2012 / Spanish and Mandarin with English subtitlesArgentina's national treasure, Ricardo Darín, plays Roberto, a gruff, anti-social loner who lords over his tiny hardware shop in Buenos Aires with a meticulous sense of control and routine, barely allowing for the slightest of customer foibles. After a chance encounter with Jun, a Chinese man who has arrived in Argentina looking for his only living relative, Roberto takes him in. Their unusual cohabitation helps Roberto bring an end to his loneliness, but not without revealing to the impassive Jun that destiny's intersections are many and they can even divulge the film's surreal opening sequence: a brindled cow falling from the sky. Presenter: Dr. Tracy Barrett, Dept. of History, Philosophy, and Religious Studies.

Juan Carlos Maneglia, Tana Schémbori / Paraguay / 105 min / 2014 / Spanish, Guaraní, and Korean with English subtitles. It’s Friday night in Asunción, Paraguay, and the temperature is sweltering. Víctor, a 17-year-old wheelbarrow delivery boy, dreams of becoming famous and covets a fancy TV set in the infamous Mercado 4. He’s offered a chance to deliver seven boxes with unknown contents in exchange for a quick one hundred US dollars. But what sounds like an easy job soon gets complicated. Something in the boxes is highly coveted and Víctor and his pursuers quickly find themselves caught up in a crime they know nothing about. Reminiscent of Slumdog Millionaire, 7 Boxes was declared of Cultural Interest by the National Secretary of Culture of Paraguay.

Juan Rayos / Spain / 82 Min / 2015 / Spanish with English subtitles. A heart-warming story of self-improvement, True Smile follows the extraordinary 1,300 kilometer journey Sergio, a blind autistic young man, undertakes with his brother. Over 30 days, Sergio and Juan Manuel traverse desert and high mountains by tandem bike, starting in Cuenca in central Spain and finishing in one of the most remote villages in Morocco’s Atlas Mountains. The candid documentary provides a magnificent glimpse into Sergio’s impenetrable world; so similar to the desert he travels to on his trip. What underlines this story is Sergio’s amazing ability to challenge his limitations and the infinite love of his brother and companion. Sergio’s motivation and strength to undertake this amazing adventure comes from his wish to see his friend Mati again at her home in Morocco. Presenter: Chloé Smith, International Studies student.

Filmmaker Sebastián (Gael García Bernal) and his cynical producer Costa (Luis Tosar) arrive in Cochabamba, Bolivia, to make a film about Columbus’s voyage to the New World and the subjugation of the indigenous population. Just as filming begins, the natives face a crisis when the government privatizes the water company and prices skyrocket. Daily protests erupt and the local man cast as a rebellious sixteenth century Taino chief also becomes a leader in the water hike protests. Spanish submission for the 2012 Best Foreign-Language Academy Award.

Q & A WITH THE DIRECTOR, JUAN RAYOS
Juan Rayos, director of True Smile, will be available via Skype for a Q&A session on Friday, February 17th at 2:00 p.m. at the Quentin Burdick Building, room 422, on the NDSU campus. The Q&A is free and open to the public.

*The Spanish Film Club series was made possible with the support of Pragda, SPAIN arts & culture, and the Secretary of State for Culture of Spain.

Scholarship applications for current and incoming students are accepted through December 1, 2016 to March 1, 2017 for the Modern Languages Department.

To complete the online scholarship application please use the following link: https://www.ndsu.edu/onestop/finaid/scholarships/ and click on the "apply now" button.  You will then be asked to log in using the same credentials that you use for blackboard.

We hope you find the system easy to use.  For general information, you can also refer to the video on the scholarship information page

All external scholarships will also be listed on the same site so log in often to see if new opportunities have been added for you.

REMEMBER: Be sure to observe the criteria and deadline for each scholarship. It is the student's responsibility to submit the scholarship application and respond to all additional questions posed.

Learning a new language can be fun! Here are some great tips.

Regan Christenson, recent NDSU graduate in English Education with a minor in French, has moved to France!  Click here to read about her job opportunity and her experiences of living in another country.

Impact Your World With the Peace Corps

For most students, it is scary to think about the future and the vast opportunities ahead. However, there are many avenues students can take in order to secure their future opportunities, relationships, growth, and work experience. The Peace Corps offers graduates just that! Monday, September 26th, 2016, the Modern Languages Department here at NDSU is having Krista Mastel, a recruiter and active volunteer in the Peace Corps, present to students who are interested in this opportunity.  Please click here for more information.

Published by: Department of Modern Languages