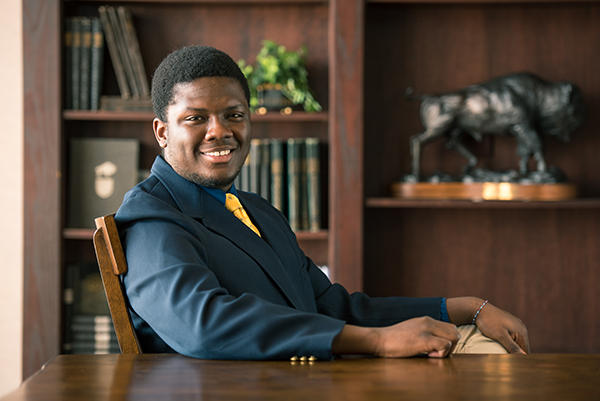 Gabriel Eronmosele pursued a college degree because he believed in the power of education. He believed it would help him grow as a person and a future professional. As he finishes his time at NDSU, he reflects on what he learned and how that will affect his career as a nurse.

1. Don’t be afraid to be independent

Eronmosele followed his older brother, Darlington, to the Fargo-Moorhead area. The brothers grew up in Nigeria and had always gone to the same schools. Darlington attended Minnesota State University Moorhead, and encouraged his younger brother to join him. Then, just to be different, Eronmosele chose NDSU.

Eronmosele’s aunt and older sister are nurses, but it was not a career he initially considered. He started college as a biochemistry major. “I loved chemistry and the way it showed the minute world we often don't see,” he says. “I also loved the widespread application of these principles.”

Then he took a nursing class and knew he would be changing majors. He has always been a people person and he realized how much he liked helping people in a medical setting. Hands-on experience through clinicals confirmed nursing was the right career for him, as it was for members of his family.

“It’s a good way to give back the community,” he says. “Nurses take care of people on their worst days and that is humbling.”

Eronmosele was active in many student organizations, including the Blue Key National Honor Society and the NDSU Lincoln Speech and Debate Society. Participating in service and public speaking events forced him out of his comfort zone and to work through the discomfort.

“That helped me think about how to navigate emotions, feelings and facts with patients.”

4. Be happy for other people

Eronmosele likes to see other people succeed. His own goals and aspirations mean little to him if the people around him don’t have the same opportunities. “I do better when everyone around me is doing well,” he says.

His peers know him as a positive, giving person. His support has left such a strong impression that they have nominated him for awards. In 2017, he won NDSU’s Gunkelman Award, which recognizes the student, faculty or staff member who has made the most significant and unselfish contribution to a happy environment at NDSU. The North Dakota Nursing Students’ Association named him North Dakota Student Nurse Leader of the Year in January 2018.

5. Change for the better

“I am more empathetic and considerate. After four years, I dig deeper by trying to find out why and asking better questions. I understand the world better and see the world in a unique light. We like to think we’re different, but I think we are all the same. We all care about certain things around the world. Our differences are more the anomaly.”

Eronmosele plans to work as a surgical nurse at Essentia Health in Fargo.