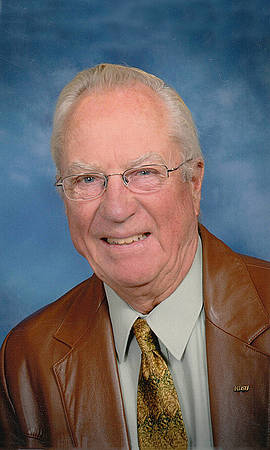 Longtime NDSU faculty member and administrator H. Roald Lund has been selected to receive an Honorary Doctorate in Agriculture. Lund, an NDSU alumnus, is set to be recognized at the 2 p.m. ceremony.

An honorary doctorate is the most prestigious award presented by a university and recognizes distinguished contributions to a specific field or service to society. Lund is the 161st recipient of an honorary doctorate from NDSU; the first was awarded in 1939.

After military service in the Army, Lund returned to NDSU and was named an assistant professor of agronomy and assistant breeder for the Hard Red Spring Wheat breeding program. He later earned his doctorate from Purdue University and again returned to NDSU as an associate professor and corn geneticist.

Lund was named assistant dean of agriculture and assistant director of the North Dakota Agricultural Experiment Station in 1969. He became associate dean and associate director in 1974, and, in 1979, he was selected as dean and director, a position he held for 15 years.

Lund served on several committees of the National Association of State Universities and Land-Grand Colleges, held leadership positions in the North Central Regional Association of Experiment Station Directors and a committee member in the Council of Administrative Heads.

Lund retired from NDSU in December 1998, after spending more than 37 years at the university as a teacher, researcher and administrator.

He was honored with the Harvest Bowl Agribusiness Award in 1998, and he was recognized in 2013 when the atrium of Loftsgard Hall was named the H.R. Lund Atrium. The H. Roald and Janet Lund Excellence in Teaching Award is presented annually in the College of Agriculture, Food Systems and Natural Resources. In addition, Lund established the H.R. Lund Freshman Plant Sciences Scholarship.

“Dr. Lund had an outstanding career leading the College of Agriculture and the North Dakota Agricultural Experiment Station for more than 25 years,” said Ken Grafton, vice president for agricultural affairs, dean of the College of Agriculture, Food Systems and Natural Resources and director of the North Dakota Agricultural Experiment Station, who nominated Lund. “His can-do attitude, his vision on the future trends in agriculture and his ability to convince others to support projects and programs benefitted the entire state. He laid the foundation on which we have attained continued success.”

Lund’s commitment to NDSU and the agriculture industry are well known.

“Looking back during Dr. Lund’s tenure as dean and director, it is obvious to see that his vision of agriculture that required our faculty to have access to modern facilities so we could apply and conduct research utilizing new technologies was very forward looking,” said Richard Horsley, professor, department head and barley breeder. “What will be the next big break for agriculture? I don’t know, but maybe we should ask Dr. Lund as he has been right for over four decades.”

Neal Fisher, North Dakota Wheat Commission administrator, said, “Dr. Lund and his wife, Janet, continue to be enthusiastic ambassadors for all things NDSU, through their dedicated involvement in a broad range of campus activities, programs and regular participation in student scholarship events. Dr. Lund is very deserving of this great honor.”