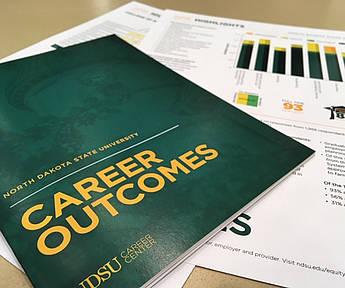 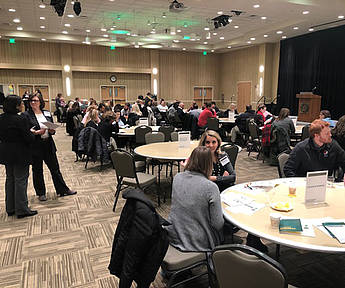 Employers value and seek out NDSU graduates, according the 2018 Career Outcomes Report. The report, produced by the NDSU Career Center in collaboration with the Office of Institutional Research and Analysis, shows 83 percent of recent graduates are either employed or continuing their education.

The report was released to media and the campus community during a news conference and presentation March 5.

“The report is very important to us at NDSU, because we think it is a way of showing our commitment and delivery to industry and the stakeholders we serve. An 83-percent rate is very high and something we are extremely proud of,” said Scott Beaulier, dean of the NDSU College of Business. “This report is a way for us to be more data-driven in our program decision making and figuring out what kind of value we are offering to the workforce in Fargo-Moorhead and throughout the Midwest.”

The report is a snapshot in time that captures important information on how new graduates fare in their careers within six months of graduation. It follows the standards and protocols of the National Association of Colleges and Employers.

Some highlights of the NDSU report include:

• 64 percent of respondents reported being employed

• 19 percent reported they are continuing their education

• Graduates accepted employment in 41 states, and five planned to work outside the U.S.

“NDSU students just starting out in their first jobs, according to this survey of about 2,000 students, are meeting household incomes for the nation as a whole. That’s pretty spectacular – it speaks to the relevance of our degrees and the high return on them,” Beaulier said.

Some top employers of NDSU graduates are:

Aditya Garg, plant manager of the CNH Industrial facility in Fargo, spoke from an employer’s perspective. His company, which produces equipment such as tractors, combines and buses, has 67 plants and 66,000 employees worldwide.

Garg said the company hires NDSU graduates in a variety of fields, including engineering, accounting and human resources. “I think 90-to-100 of 132 engineers on-site came from NDSU,” he said, noting the company and the local plant are proud of their long association with NDSU and its graduates.

The report also broke down data for individual NDSU colleges. The percentages of recent graduates who are employed or continuing their education are:

• College of Science and Mathematics –81 percent