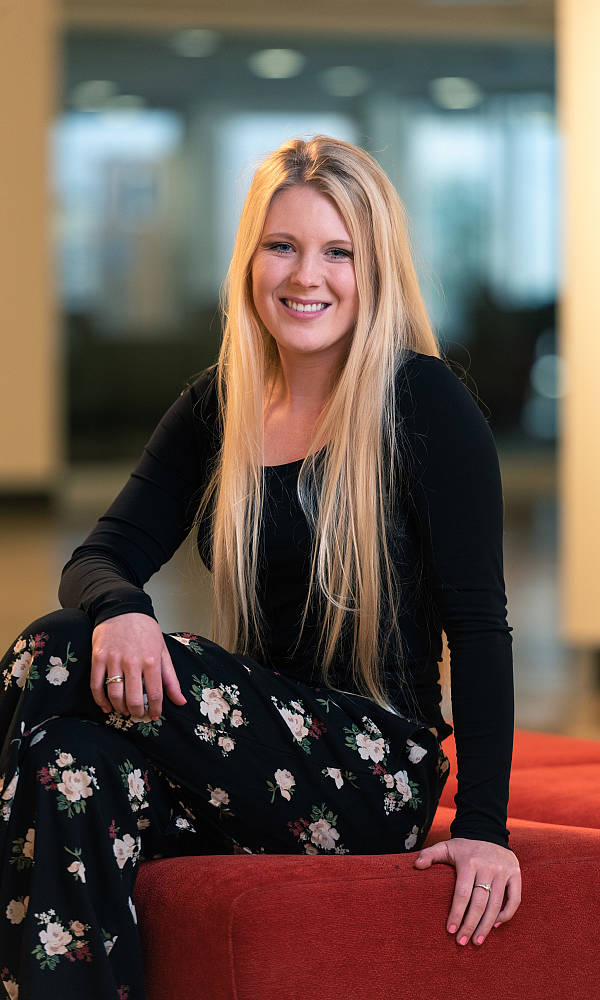 Graduating NDSU senior Sydney Dale wants to make a difference in the world, and she’ll urge her classmates to do the same.

Dale has been selected as the class representative to speak during the NDSU commencement ceremony Saturday, May 11, at 2 p.m., in the Fargodome. The afternoon ceremony includes graduates from the Colleges of Agriculture, Food Systems and Natural Resources; Business; Health Professions; and Science and Mathematics.

“This is a great honor – representing the Class of 2019 is exciting and rewarding,” said Dale, who, in just three years, is earning her Bachelor of Science degrees in marketing and global business. “We can have a positive impact on our world. I believe that by being kind and generous, having grit, being humble and having a strong work ethic and integrity are ways to leave a footprint. I also hope that my classmates recognize that being a Bison and representing NDSU is truly special.”

Dale accomplished many things during her time on campus. She was a pole vaulter on the NDSU women’s track and field team from 2016 to 2018. She received the Bison Academic Performance Award, an honor that acknowledges a grade-point average of 3.5 or higher.

She has made the Dean’s List for five semesters and maintained a 4.0 GPA. The native of Watertown, South Dakota, is a member of the Beta Gamma Sigma International Honor Society, a recognition for the top 10 percent of students at highly-selective AACSB-accredited schools of business. NDSU is among the only five percent of schools to earn the designation.

One of her educational highlights was a study abroad experience in the United Arab Emirates, visiting Dubai, Abu Dhabi and Sharjah. Dale learned about Arabic culture and values, and that insight helped her understand a new perspective. “The experience gave me a new outlook, as I now see the world differently,” she said.

In January, she also attended the South Dakota Governor’s Conference on Tourism.

“NDSU has prepared me both professionally and personally,” said Dale, who is the daughter of Jim and Nanette Dale. “This university has made me a well-rounded individual. I’ve learned that if you work hard, you will be rewarded in the long run. NDSU pushed me to be the best version of myself and helped me develop the traits I need in order to succeed in my life and career.