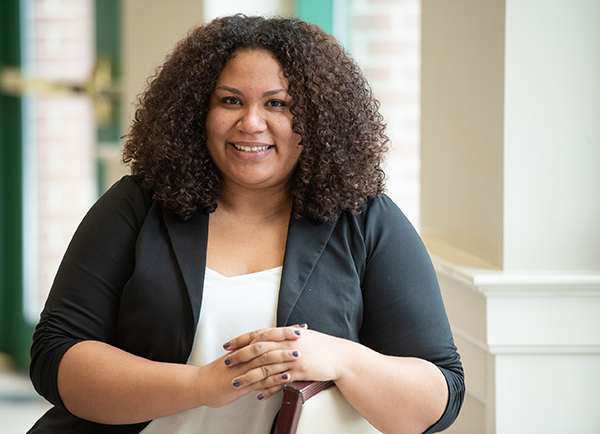 It’s an NDSU tradition for a graduating senior to deliver the commencement address to the public and their peers.

Obembe is a nursing major who will speak to the hundreds of people attending winter commencement, scheduled for Friday, Dec. 14, at 2 p.m., in the Sanford Health Athletic Complex.

“Hard work is the foundation of success. I think it’s a message that resonates in this community – North Dakota is all about hard work,” said Obembe, who is from Fargo. “You don’t have to be a statistic; with hard work, you can be whatever you want to be.”

In many ways, her message mirrors her own experience.

She started college at the University of Pittsburgh, and did not perform her best academically. During her sophomore year she transferred to NDSU, feeling it was best to return to her hometown.

The decision turned her life around.

“When I stepped onto this campus, I was not prepared for adult life. But, through my own dedication to bettering my life and the support I received at NDSU, I have come out a completely different  person,” she said, noting she was originally a geology major at NDSU.

One night on a geology field trip, Obembe decided that she would prefer to work with people rather than rocks. She changed her major to nursing, and it brought out the best in her.

“Here at NDSU, there is a community of support. All you have to do is step forward, work hard, take initiative and show you want more for yourself,” Obembe said, expressing special appreciation for instructor and mentor Trish Strom, assistant professor of practice in the Department of Nursing. “The people on this campus want you to succeed, and are experts in their field. They guide you toward success – this is a good place.”

Her collegiate journey became one of achievement. Obembe was named NDSU’s and North Dakota’s Student Nurse of the Year for 2017-2018. She was active in the College of Health Professions Ambassadors, serving as membership chair. In addition, she was a board member for  Student Nurse Association of NDSU and the National Student Association of North Dakota. She also was a student mentor for several nursing classes and labs.

Obembe plans a career in the area of mental health and hopes to become  psychiatric and mental health nurse practitioner. She enjoyed serving as a mentor and also hopes to teach in the years ahead.

She is the daughter of Paul and Janice Obembe of Fargo.