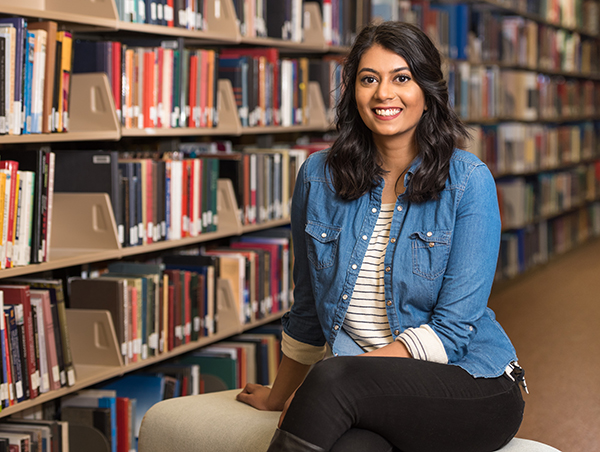 Ayushi Saxena wants to work in counter terrorism. The NDSU senior has wanted a career in this field since homemade bombs killed three people and severely injured hundreds at the Boston Marathon in 2013.

Saxena’s goal is to make a global difference. To do that, she’ll need an array of skills. She already had some of them, like success in mathematics, curiosity and tenaciousness. But others were developed through classes and hands-on research projects at NDSU.

“Having a computer science degree helps in any field,” she said. “It would be useful for anyone from a fashion designer to a chef. But it’s vital for the work I want to do. And NDSU gave me all the tools I’ll need to be successful when I get there.”

Demand for cybersecurity research and professionals

Saxena, who is majoring in computer science and minoring in statistics, took advantage of the opportunity to conduct research as an undergraduate. She worked on several projects, including a study to determine the hacking vulnerability of a coffee pot with built-in Wi-Fi. This project was her first experience with cybersecurity, a field closely related to her career aspirations.

Saxena’s group found a hidden audio program installed in the coffee pot, making it vulnerable to hackers taking over the microphone and listening to private conversations. Hacking smart devices, like televisions, phones and household appliances, could be the next wave of cybercriminal activity, said NDSU computer science assistant professor Jeremy Straub. That’s why it’s important for NDSU to focus on shedding light on smart device vulnerabilities, while also coming up with swift solutions.

“Cybersecurity is basically at a zero percent unemployment rate right now,” Straub said. “Some people think it’s even at a negative unemployment rate because many in the field are working one job and then they are pulled into another they didn’t necessarily want. But their help is really, really needed. They are overemployed. NDSU is on the cutting edge of cybersecurity research. We’re always looking to push one step beyond the current known boundaries of things.”

“I hope to do more research of this kind,” Saxena said. “It’s very interesting and it’s given me a lot of new skills I can use when I graduate.”

Saxena hopes to attend graduate school in Maryland or Washington, D.C., to continue to prepare for work in counter terrorism. She is originally from India and is scheduled to become a United States citizen in 2019.