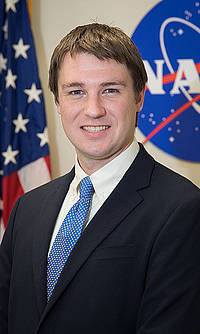 Tyler Lane first dreamed of working for NASA when he was 8 years old. He spent many nights gazing at the sky near his childhood home of Grand Rapids, Minnesota.

Sparkling stars and the occasional manmade satellite blipped across the darkness of space. The satellites, tangible examples of mankind’s goal to explore, motivated Lane to pursue his dream.

Mission accomplished: Lane is a NASA aerospace engineer in the Software and Robotics Simulation Division at the Johnson Space Center in Houston. He started his career in August after earning a master’s degree in electrical and computer engineering from NDSU.

Lane already has years of experience at NASA. He interned at the Goddard Space Flight Center and the Johnson Space Center. He helped develop the electrical system and primarily the power distribution unit for a habitable airlock, known as HAL. He also conducted rapid prototyping and testing for an experimental cable robot.

Lane’s road to NASA began by taking engineering courses through Tri-College University while studying physics and astronomy at Minnesota State University Moorhead. He first focused on biomedical engineering at NDSU, before finding a niche in control systems and robotics.

“I was fascinated by the idea that everything, from the cruise control in your car to the thermostat in your home, needs a control system,” Lane said.

He enjoys finding new and creative solutions. “The capabilities of the newest robotics create new scenarios where you have to think differently and develop new methods of solving problems,” he said.

Lane credits discovery- and project-based learning in his NDSU engineering courses with preparing him for his career.

“My professors would pose a real-world problem and it was up to us to figure out what information and resources we needed to solve it,” Lane said. “They helped us to think like an engineer.”

He also was a member of Institute of Electrical and Electronics Engineers and the Bison Robotics team at NDSU.

Lane has message to fellow graduates who are chasing their dreams.

“Plan ahead and focus on communication and teamwork,” Lane said. “They are the two most important soft skill sets you’ll need in any group project. There might be some personality clashes or different ways of thinking, and clear communication allows you all to achieve a common goal. NDSU helped me develop my technical and soft skills, which gave me a jump start and the ability to land a great job at NASA.”