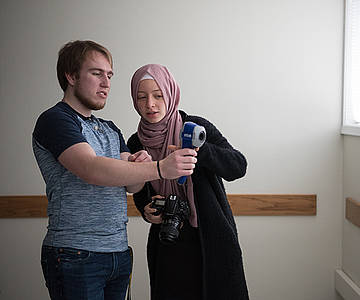 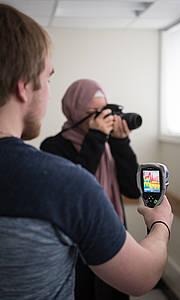 NDSU students Noor Abdelhamid and Benjamin Dalton are working on a groundbreaking project. They are developing a protocol that is the first step toward a more accessible way to assess the energy efficiency of buildings.

The architecture field is well aware that outer walls of buildings can leak large amounts of energy, wasting money and non-renewable resources. New windows or insulation can help, but the most effective methods for analyzing energy efficiency require special tools and/or can be time-intensive. The cost and effort are deterrents for building owners.

Abdelhamid and Dalton’s protocol is the first step toward a more accessible method. Their goal is to develop a quick, lower-cost way to correlate geometry and the shape of a building to energy performance. They are both juniors majoring in architecture who are applying their knowledge of architectural geometry and current technology to create the protocol. This set of conventions will lay the groundwork to create a formula and then a digital tool, such as an app, that can be used by businesses and homeowners. The tool, using the protocol and the formula, will help users identify which parts of the building are most susceptible to energy leaks. Then by correcting leaks, users can improve energy efficiency and save money.

Abdelhamid and Dalton’s project is part of a larger effort to help Fargo become a national model for reducing the use of non-renewable resources. They are members of the eFargo team that helped Fargo win the $5 million Georgetown Energy Prize for its innovative approaches that can be replicated in cities around the country. Over the course of the two-year competition, Fargo saved 172 million British Thermal Units, which is equivalent to a 6 to 7 percent reduction in energy used, on average, for residential properties. The protocol is a continuation of that work.

The eFargo team is led Malini Srivastava, assistant professor of architecture. She has had a career-long interest in sustainability – both designing energy-efficient buildings and improving energy-efficiency of existing structures, which account for about 40 percent of the city’s energy consumption. Srivastava and Mike Christenson, professor of architecture who specializes in digital technology and visualization, developed the concept for the protocol, formula and digital tool.

Then they offered architecture students the opportunity to work with them.

Abdelhamid and Dalton were selected and started working on the protocol in fall 2017. One of their first steps was reading academic papers on the energy analysis of buildings. They learned that researchers are well aware of the problem and that there is interest in developing a quicker, easier way.

A simpler solution has been elusive because it is a complex problem, Christenson said. The protocol and formula will need to account for many variables, such as how much air a building holds and how much of the surface area is wall versus windows.

Abdelhamid and Dalton are up for the challenge. They’ve completed field work that involved taking photos and thermal images of the outer walls of several Fargo schools. They captured more than 300 images per building that they turned into 3-D models. The next step will be to create the protocol.

The hands-on experience is building their resumes. They are advancing their field, helping make Fargo a national leader in energy efficiency and gaining skills that will serve them well in the workforce or future educational pursuits.

“If we go to grad school, this will help with reading papers and looking at multiple sources,” said Abdelhamid, who is from Cairo, Egypt.

“We are learning time management because we are working on our own schedule,” said Dalton, who is from Plymouth, Minnesota. They need to make substantial progress, if not have the protocol finished, by the end of spring semester. But it is up to them to figure out the steps and put in the time to reach that goal.

They are also applying their skills to structures that already exist, which is a different way of thinking for an industry that designs new buildings. “This extra dimension will make them strong candidates for employment,” Christenson said.

Developing the protocol is funded by a grant from the North Dakota Department of Commerce State Energy Program.