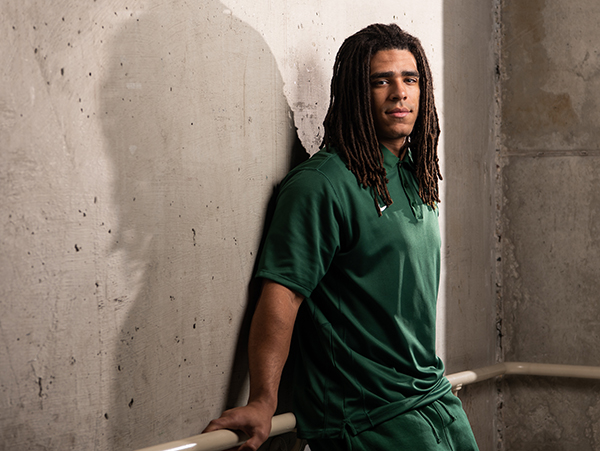 Greg Menard has been a mainstay in the NDSU football lineup since his freshman year in 2014. The senior civil engineering major’s relentless drive helped him become one of program’s all-time great defensive linemen. He’s fourth in school history with 38 career sacks, just three shy of the school record as the team heads into a semifinal playoff game with South Dakota State on Friday.

And he’s not just dominating on the football field. Menard, from Lakeville, Minnesota, is an award-winning student who takes his academic success even more seriously than his athletic accolades. He is scheduled to graduate Friday at 2 p.m. during NDSU’s commencement ceremony at Sanford Health Athletic Complex.

The following is a recent chat with Menard about his academic success, favorite memories and overall experience as an NDSU student:

HOW DID YOU BALANCE ACADEMICS AND FOOTBALL?

Being busy with classes and football makes you realize you have to plan what you do. You have to get stuff done, and you can’t procrastinate. You know every night you have a limited amount of time, and you don’t have all day after class to get things done. You have to get on top of things faster. You can’t waste time.

HAVE YOU LEARNED THINGS AS A MEMBER OF THE FOOTBALL TEAM THAT HAS HELPED YOU BE SUCCESSFUL IN THE CLASSROOM?

I think the two really co-exist nicely with each other. If one aspect of your life is going bad, it’s hard to have the other aspect going well. It’s that trickle over effect. One of the big things I’ve learned is the more studying I’ve done, the less nervous I am for a test. It’s the same with football. The more film you watch the less nervous you are before going into a game because you know you are prepared. You can’t just show up for a test, and you can’t just show up for a game.

DESCRIBE YOUR CLASSROOM EXPERIENCE. HOW HAVE YOUR PROFESSORS HELPED YOU GROW AS A STUDENT?

My classroom experience has been very similar to most people’s at NDSU. When you first get here and get over that initial shock that you are in control of every aspect of your life, you realize the easiest way to succeed in the classroom is to show up. If you are there, you are going to learn something.

HOW DID YOU PICK YOUR MAJOR?

I knew I liked math in high school, and I wasn’t sure what I wanted to do with that. My dad suggested engineering.

WHAT IS YOUR FAVORITE CLASS?

My favorite class was engineering 212. It was called “Impact of Technology on Society.” It was a great way to learn about how society has been changed by technology and how engineering principles have impacted history.

WHO IS YOUR FAVORITE TEACHER?

Dr. Wei Lin. He is water resources and environmentally focused in the civil field. I had a lot of classes with him. And he was a consultant for our senior design project. He’s been very helpful in answering all my questions, and he’s been a good mentor.

WHAT IS YOUR FAVORITE THING TO DO IN FARGO?

A lot of what I do when not at practice, games or in class is socializing with friends. I’ve made a lot of really great friends here and we like to get together whenever we can.