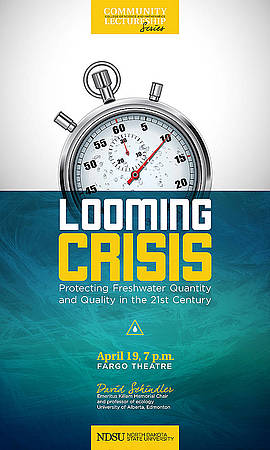 About one-third of the world’s population has insufficient freshwater for drinking and sanitation. North America has sidestepped many major water problems due to strong, science-based water policies, but some experts say freshwater quantity and quality could quickly worsen due to apathy and inaction.

David W. Schindler, an internationally recognized limnologist and North Dakota State University graduate, has spent decades working to identify and address North America’s freshwater problems. He will share some of his research at the annual community lecture.

Schindler’s presentation is called “Protecting Freshwater Quantity and Quality in the 21st Century.” It is scheduled for Wednesday, April 19, at 7 p.m., at the Fargo Theatre. “In the 21st Century, water, not oil, will be the reason for most of the world’s conflicts,” Schindler said.

Schindler will address the increasing costs of declining water quantity and quality, which includes billions of dollars in losses to agriculture, human health and water-based recreation.

Schindler also is scheduled to receive the NDSU Alumni Association’s 2017 Henry L. Bolley Academic Achievement Award on Thursday, April 20, in Fargo. The award honors an individual who has attained noted achievements in the area of education as teachers, researchers and/or administrators. He is the Emeritus Killam Memorial Chair and professor of ecology at the University of Alberta, Edmonton. He earned his bachelor’s degree in zoology at NDSU in 1962 and was a Rhodes Scholar while earning his doctorate at the University of Oxford in England. He received an honorary doctorate from NDSU in 1978.

Schindler has received more than 20 international awards, including the First Stockholm Water Prize, the Tyler Award for Environmental Achievement and the Rachel Carson Award.

The annual community lecture aims to introduce nationally recognized scientists to the broader community. Through the years, presenters have explained their science in ways various age groups, from junior high students to older adults engaged in lifelong learning, can understand and appreciate.

The event is sponsored by NDSU’s College of Science and Mathematics.