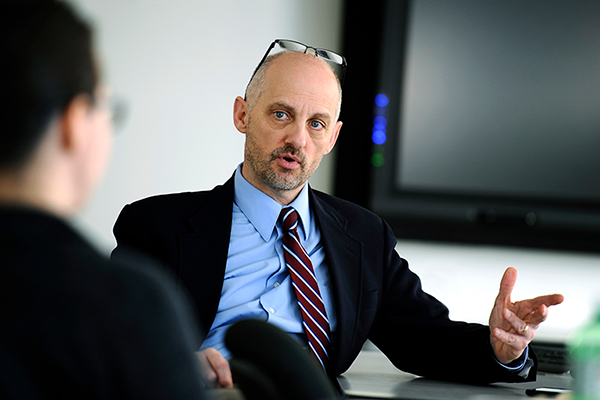 North Dakota’s population is at greater risk for outbreaks of measles and other preventable diseases because the state struggles with some of the lowest child immunization rates in the country.

But the NDSU Center for Immunization Research and Education could help change that through an ongoing project aimed at improving doctors’ and nurses’ communication techniques during medical visits.

Staff from the center use lectures, online resources and print materials to educate health care professionals, students in health care fields and the public about the benefits of immunizations. Medical providers are trained how to debunk the common myths about vaccinations and the best ways to communicate this to their patients.

“The mission is to be a place that hosts expertise on immunization practice and policy,” said Paul Carson, the center’s medical director and director of infection prevention and control at Sanford Health in Fargo. “We want to be a place for education, advocacy and research to assure all North Dakotans are fully protected against vaccine-preventable diseases.”

Several states recently have had outbreaks of preventable diseases. The outbreaks were linked to larger numbers of unvaccinated people. In 2014, 27 states reported 667 cases of measles spread mostly through the unvaccinated population, according to the Center for Disease Control and Prevention’s National Center for Immunization and Respiratory Diseases. It was the largest number of cases since measles was officially eliminated in the United States in 2000.

North Dakota is at risk for a similar outbreak because of declining childhood immunization rates. For the last couple school years, the state’s vaccination rate for measles, mumps, rubella, diphtheria, tetanus and pertussis is in the bottom 10 in the country for children entering kindergarten.

There are several reasons for the decline in North Dakota’s rates, said center project manager Kylie Hall. Some people believe side effects of vaccinations are worse than the diseases. Other people think vaccinations are dangerous or ineffective. Some people cite personal or religious reasons.

A major concern for parents is a connection between vaccinations and autism. The 1998 study that made the link was quickly refuted and debunked, Hall said. However, some parents still doubt the safety.

“Many parents need more information,” Hall said. “And the way that information is delivered can have a profound impact on them.”

Carson said medical providers are the most effective messengers because they have established relationships with patients who tend to trust their recommendations.

The North Dakota State Board of Higher Education approved formation of the center in 2015 to study state vaccination trends and educate citizens about the benefits of immunizations.

The center primarily provides training and education to health care professionals. Much of the training focuses on the best practices to relay information to parents about the importance of up-to-date immunizations. There also are several research projects in the works to help increase adult and child immunization rates in North Dakota.

“Just a small change in North Dakota’s rate could significantly reduce the state’s risks of an outbreak,” Carson said. “We want to help make that happen.”