Love of learning motivates student to do his best 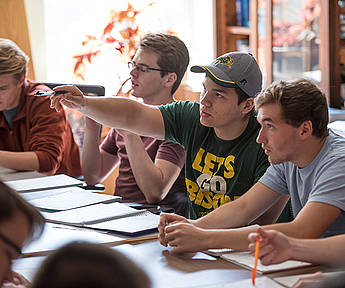 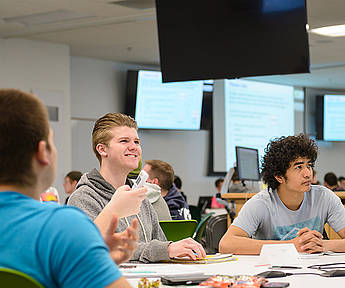 Sophomore Jose Agudelo loves studying physics and math, and he plans to go to graduate school or to get a good job after graduation.

There are days he would like to sleep in or watch TV. But the fun and challenge of his classes and thoughts of his future motivate him to go to class and push himself academically.

“If you go to class, you’ll actually know that you like what you’re studying,” said the physics and math major from Moonachie, New Jersey. “If you don’t go to class, you won’t realize the things you want to do.”

Most NDSU students, like Agudelo, make going to class a priority. In fact, a 2016 survey showed four of five NDSU students report attending class at least 90 percent of the time. They understand showing up is the first step to performing well academically and graduating on time.

Going to class helps Agudelo gain deep understanding of the material by engaging with it in multiple formats. For example, in his calculus classes, he listened to the professor, wrote lots of notes, read the book and explained what he learned to friends. His active engagement in class and with the material made it easier to prepare for tests.

For a particularly challenging class, he made a point to be at every single class and to frequently visit the professor during office hours. That helped him stay on top of the material and to clarify things he didn’t understand. He worked hard and was proud of what he learned and the grade he earned.

Some classes don’t excite him as much as his math and physics classes, but he recognizes their importance in his overall education. He motivates himself to go to those classes by focusing on the positive aspects, such as how they will help him develop skills he needs, and making friends he is eager to see in class. “Find the little things that make it worth it to get to class,” he said.

Agudelo likes what he is learning and thinks of long-term goals, such as graduating on time and being successful in his future career. That’s why he’s in class every day, ready to learn and to be an active participant.

NDSU’s STEPS to Success campaign highlights the actual attitudes and behaviors held by the majority of NDSU students, like Agudelo, and gives tips on how to achieve success in college. The initiative’s goal is to reduce misperception, which is important because when students know what the actual norm is, many of them adjust what they do to be more in line with what their peers are doing.