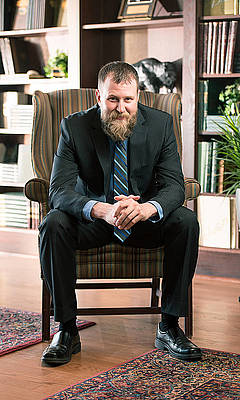 Graduating senior Christopher Eggen is a former Marine. He has a straightforward message for his classmates.

“Be part of a team, lead by example and appreciate the journey,” said Eggen, who has been selected to give the student address at the 10 a.m. NDSU commencement ceremony on Saturday, May 12, in the Fargodome.

Eggen is receiving his Bachelor of Science degree in the crop and weed science emphasis of agronomy, with minors in agribusiness and botany. Prior to attending NDSU, he served eight years as an active-duty member of the U.S. Marine Corps, with tours in Afghanistan and Iraq.

At NDSU, he became active in a number of clubs and organizations. In doing so, he found a sense of belonging at the university.

He participated in the NDSU Ag Ambassadors, NDSU Agronomy Club and Bison Pullers. He was also member of the NDSU Chapter of Ducks Unlimited and NDSU American Legion Post #400. He was a member of the 2017 NDSU Homecoming Court representing the Ag Ambassadors and recently was selected as one of the top 10 seniors in the College of Agriculture, Food Systems and Natural Resources.

Eggen was a three-time recipient of the Harry and Lillie Seidel Agriculture Scholarship, and gave the student response for the 2017 scholarship recipients. He also received the TRiO Offices’ Veteran Education Training Student Achiever award in 2015.

“I appreciated my journey at NDSU,” Eggen said. “College allowed me to embrace who I was and helped to shape who I was meant to be. The road to graduation was not always a smooth one, but I knew that everything happens for a reason and I am right where I am supposed to be.”

Eggen has accepted a position as a research specialist working with corn and soybeans for WinField United, a branch of Land O’Lakes Inc., in Bismarck, North Dakota. He hopes to use the experience to pursue a master’s degree in alternative cropping systems and crop production.