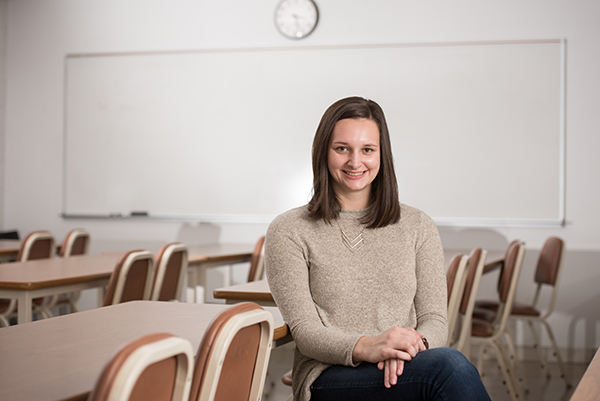 Hannah Quade wasn’t fully prepared for her first class at NDSU – she forgot a pencil.

She quickly overcame that uncertain beginning and after four years of achievement, Quade has been selected as the class representative to speak at NDSU’s winter commencement, scheduled for Friday, Dec.15, at 2 p.m., in the Sanford Health Athletic Complex.

“It is really an honor to be chosen,” said Quade, a native of Bagley, Minnesota, who will earn her Bachelor of Science in industrial engineering and management. “I spoke at my high school graduation and cried for three minutes. It’s nice to see how far I’ve come, and I keep telling myself I’m not going to cry at this one.”

Her message to classmates, family members and friends will be heartfelt and to the point. “Since I forgot my pencil on that first day, the most important lessons I’ve learned at NDSU are: expect the unexpected, work hard and be proud of who you are,” she said.

Quade will graduate with a 3.42 GPA, and she earned several scholarships at NDSU, including the Dean Joseph Stanislao Scholarship, Gordon Heller Scholarship and Phillip W. Ruud Scholarship.

She has been active in the NDSU College of Engineering Ambassadors and was a member of the Society of Women Engineers.

Over spring break in 2015, she also participated in a Students Today Leaders Forever service project tour that featured stops in Wisconsin, Indiana, Pennsylvania and New Jersey before reaching Washington, D.C. Along the way, Quade did everything from work at a food bank to build picnic tables at a state park to clean up after a charity fundraiser.

She praises the education she received at NDSU. She is thankful for her many friendships and appreciates the university’s welcoming environment. “Everyone is so friendly,” said Quade, who is the daughter of Clayton and Jodi Quade. “There isn’t a day that I walk through campus where I don’t see someone I know. That’s such a nice feeling to have when there are more than 14,000 students here.”

For her, NDSU was the right choice. “If I was to spend four more years of my life or spend my life savings, I wouldn’t want to be anywhere else,” she said.

Quade confidently looks to the next chapter in her life. She has accepted a job as a manufacturing engineer with Integrity Windows and Doors of West Fargo, and she hopes to return to NDSU in the near future to earn her Master of Business Administration degree.