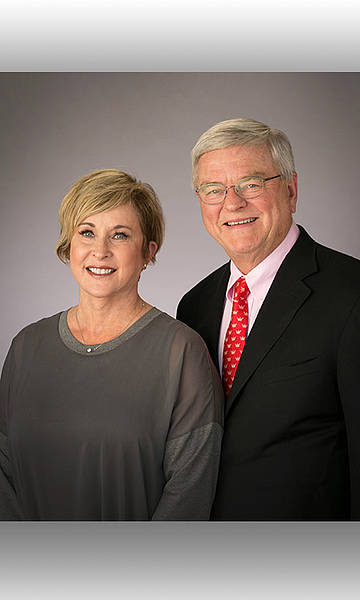 NDSU announced March 7 the establishment and launch of a transformative, interdisciplinary research institute focused in areas of global innovation, trade and economic growth thanks to leadership philanthropy from Sheila and Robert Challey, the Charles Koch Foundation and other benefactors.

Initial gifts of more than $30 million have been secured, already resulting in the largest collection of philanthropic support focused solely on supporting faculty and student scholarship in institutional history. The institute has a goal of raising $50 million for up to 15 years of programming, which will catalyze new discovery, learning, and service to the state, region and world.

Complex challenges being explored by major research universities today are often at the intersection of academic disciplines, and the institute will draw from numerous programs to encourage study of questions such as: how do global innovation, trade and institutions advance human potential?; how do structural barriers limit full participation and advancement in economies?; how different policies impact diverse communities in the region and throughout the U.S. economy?; and what role does technology play in broadening innovation?

“The problems we face in the global economy related to trade, immigration, and economic volatility are some of the most pressing issues we face as a nation and certainly in the Midwest, where we are particularly reliant on international markets and face serious workforce shortages,” NDSU President, Dean L. Bresciani said. “Establishing this institute allows us to bring together the disciplines and people needed, in the right part of our country and at the right institution in NDSU, to deal with these challenges.”

The new initiative is named in honor of longtime NDSU benefactors, Sheila and Robert Challey, of Walnut Creek, Calif. The Challeys have provided a leadership gift commitment of $10 million. Known as the “Sheila and Robert Challey Institute for Global Innovation and Growth,” the program will be administered through NDSU’s College of Business.

“This is both the completion and start of a dream we have had to support NDSU, and to help improve not only the lives of students, but the world,” Sheila Challey said. “It’s the completion in that we are able to gather today and celebrate the historic outpouring of support for an idea. And, it’s a completion because Bob and I have spent our lives thinking about how to make the world better for everyone, and in particular, how to benefit NDSU. NDSU now has a program committed to tackling deep questions about human potential, and that venture is just getting started.”

The Challey Institute will support the hiring of an executive director and provide funding for up to 15 faculty positions in a variety of fields including economics, engineering, education, entrepreneurship, finance, political science, public policy and sociology. New doctoral and graduate fellowships will be offered to students from a range of academic disciplines, and experiential learning opportunities for undergraduate students will be launched. Faculty exchanges, speaker series and outreach activities will bolster the institute’s impact in bringing together students, faculty, business and community leaders to address real problems and identify topics where the Challey Institute can make a significant contribution.

“NDSU means so much to the people and things we care about in the world,” Robert Challey said. “We are grateful to have this opportunity to support a game-changing endeavor for students, faculty, North Dakota and the world. We invite others who are passionate about NDSU and its impact to join us.”

Scott Beaulier, the Ronald and Kaye Olson Dean of Business at NDSU, said the intellectual inspiration for the Challey Institute comes from the late Mancur Olson, a 1954 graduate of NDSU. Mancur grew up on a farm east of Buxton, North Dakota, that his grandfather homesteaded in the late 1870s. Following additional education as a Rhodes Scholar, at Oxford and Harvard, he went on to become a professor of economics at the University of Maryland-College Park, and was widely considered one of the most influential economists and thought leaders in his discipline. Through his scholarship, he asked questions, such as: “Why are some countries rich and others poor? And, why is it that everyone worldwide is entrepreneurial, yet only a few parts of the world are prosperous?” After his unfortunate death in 1998, the Economist magazine noted, “… his theories might well have won him a Nobel Prize.” Olson received the 1989 Alumni Achievement Award from NDSU.

“I’d argue that Mancur Olson was the most influential and noted scholar to ever come from North Dakota and NDSU, and we didn’t even know, understand or appreciate his impact while he was alive,” Beaulier said. “Today, his legacy, scholarship, writings and questions live on, and the Challey Institute will tackle many of the questions that were on Olson’s mind as a scholar.”

Philanthropic support for NDSU through the NDSU Foundation is occurring at unprecedented levels, and the timing couldn’t be more important as the university pushes to achieve greater levels of distinction and support for its faculty, students and programs, said John R. Glover, president/CEO of the foundation.

“Big ideas and big vision inspire greater levels of thinking, problem-solving and impact, and this is extremely attractive to philanthropists and what they want to achieve with their gifts. Higher education is a place where learning, discovery and sharing happens unlike any other, and NDSU is a place that benefactors want to invest in,” Glover said.

“NDSU has developed an exciting vision to examine the impact of trade and innovation on society and expand students’ ability to research and exchange ideas about the world in which they will live and work,” said Charles Koch Foundation executive vice president, Ryan Stowers. “We’re happy to join so many other NDSU benefactors in helping them turn this vision into reality.”

Sheila and Robert Challey’s involvement with NDSU dates back generations, with Robert’s parents, Clyde and Myrtle Challey, both graduating from the university. Myrtle Challey taught food and nutrition classes on campus, and Robert’s uncle was Bill Euren, director of the Gold Star Band from 1948-1968. After earning a chemistry degree from NDSU, Robert completed graduate school at University of California-Berkeley and has had a successful career in California real estate development. In 1981, he joined the NDSU Foundation as a trustee and serves on its Executive Governing Board. Robert received an Alumni Achievement Award in 1986, the Foundation’s Service Award in 2002 and an honorary doctorate from NDSU in 2009. Sheila and Robert support scholarships in performing arts, facility projects and many other campus initiatives. The Challey School of Music is also named in their honor, recognizing support for one of their favorite passions. They have three adult children.

The Challeys are volunteer co-chairs of NDSU’s comprehensive fundraising campaign, currently in its advanced gifts phase. The campaign aims to significantly grow support for all areas of the university, but with a special emphasis on new investments to impact faculty and students. The campaign will publicly launch later this fall.

“I speak on behalf of the College of Business faculty and students in saying we are absolutely humbled by the energy and support for this initiative,” Beaulier said. “We are excited to have so many wonderful benefactors of NDSU involved in this transformative venture and look forward to working with faculty and students across campus to pursue our land-grant mission.”