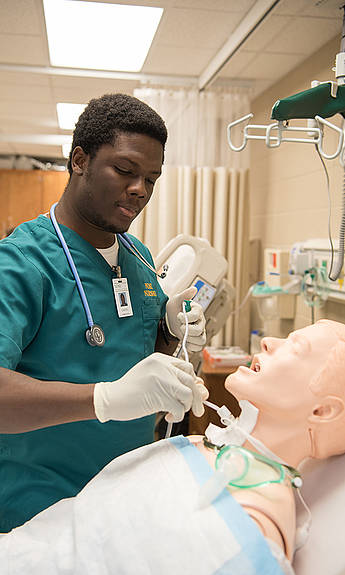 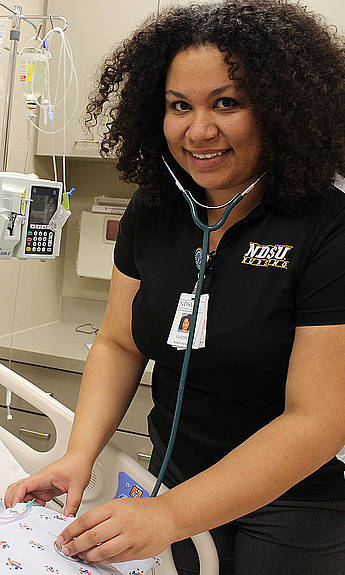 Aurora Obembe, a senior in the NDSU School of Nursing in Fargo, was named the North Dakota Student Nurse of the Year. She received the honor from the North Dakota Nursing Students’ Association at the group’s annual convention last month.

As Student Nurse of the Year in North Dakota, Obembe participated in interviews along with candidates from nursing programs statewide. She has volunteered at an area cancer treatment center, flu shot blitzes, lactation support groups and the Special Olympics. She also has worked with a rheumatologist who researches how to best use nursing skills in outpatient settings.

“I chose to go into nursing because I believe it’s the perfect blend of art and science,” said Obembe. “We get to use medicine and the knowledge of science and combine that with our compassion and caring to really make a difference in patients’ lives and the community that we live.”

Obembe also works part-time as a direct care professional with people with disabilities and as a patient care technician in a hospital intensive care unit. She plans to pursue clinical nursing experience when she graduates and later hopes to attain a graduate degree in nursing education.

Eronmosele, a senior in nursing, was named North Dakota Student Leader of the Year at the convention. His education and other influences have played a role “leading me to the realization that I do better when we all do well,” he said.

He has served as a lab mentor for NDSU nursing students and also volunteers at the Salvation Army, at nursing homes and other community events. He served as treasurer for the NDSU Student Nursing Association.

Eromosele’s additional activities include college and national speech and debate competitions. He was inducted into the Blue Key Honor Society, Sigma Theta Tau International Honor Society of Nursing and Phi Kappa Phi, a collegiate honor society. A recipient of the Gunkelman Recognition Award from NDSU, he was recognized as someone who has made the most significant and unselfish contribution to a happy environment at NDSU.

When he graduates, Eronmosele hopes to work in North Dakota on a medical surgical unit and become involved in health care policy discussions as his career progresses.

At the convention, NDSU nursing students named to the state SNA Board include: Jarren Fallgatter, Kennedy Leigh Tracey, Megan Frederick, Aurora Obembe and Allyssa Albrecht as graduate consultant. Trish Strom, assistant professor of practice in the NDSU School of Nursing, was named as the board’s adviser and delivered a keynote address calling for a nursing revolution through attitude, culture and example.

The NDSU School of Nursing in the College of Health Professions provides bachelor’s and graduate nursing education to advance knowledge of nursing, demonstrate leadership, and meet the needs of a diverse society. Programs are available for part- and full-time students, working professionals and those seeking online educational opportunities.