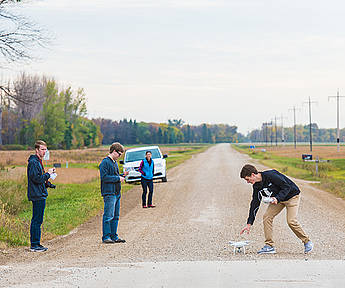 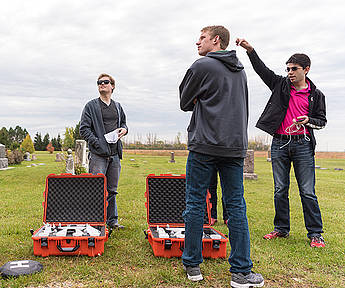 On a Friday morning, photography professor Meghan Kirkwood and five students piled into a mini-van and headed north of Fargo. They drove to a rural area near Harwood, North Dakota, to use drones to take photos and video for a class project.

The students put a lot of thought into selecting the site. Was there open space for take-off and landing? Were there plenty of interesting man-made and geographic features to photograph? Was the site five miles away from the airport’s protected air space? Did the landowner give permission?

Once they arrived, the students quickly paired off and each team prepared a small unmanned aircraft system for take-off. Each pair had a flyer, who operated the drone, and a visual observer, who was required to watch where the drone was at all times.

Visual observer Griffin Birmingham, a junior majoring in English and computer science, read off the checklist for flyer Thor Hanson, a sophomore majoring in electrical engineering.

Soon they had gone through the list and Hanson fired up the drone using what looked like a video game controller. Four propellers on the top of the drone started whirling, and it hovered over a round, orange mat like a giant insect.

The drone lifted off the mat, sounding like a swarm of bees. “Make a box,” said Kirkwood, assistant professor of visual arts, photographer and a licensed small unmanned aircraft system pilot.

Hanson flew the drone in a square well above his head, but still fairly close to the ground. Then he shot it vertically 87 feet into the air.

Meanwhile, a second team prepared their drone for take-off. They had flown the drone a couple times before and expertly went through the checklist. Then they launched the drone into the cloudy sky. It was exhilarating.

This fall is the first time NDSU has offered a drone photography class. It was developed by Kirkwood, a studio art instructor whose expertise is photography, specifically landscape photography. Her vision for the class was a deep exploration of this emerging field of photography and its real-world applications and issues.

The technology to create aerial images is more accessible than ever for recreational and professional purposes. It’s possible to capture footage that required an airplane or satellite in the past. It has also opened up a whole new set of questions about air space and privacy. “People feel nervous about seeing things flying around,” Kirkwood said. “Who is operating it? What are they looking at? People are excited, but also apprehensive.”

Kirkwood compares the use of drones to the first aerial photography from air balloons in the mid-1800s. “It’s a powerful moment that changes how people see space.”

The overall objective of the class is to develop an informed set of ideas about the technology, whether students use it for recreation or encounter it in their future careers. The class covers:

Students were attracted to the hands-on experience. “I’ve never flown a drone before, and it sounded really interesting,” said Kylie Bentz, a junior majoring in biochemistry.

She is among the 18 students in the class, most of whom are part of the NDSU Honors Program. The class includes students from many majors, including English, engineering, computer science, finance and biochemistry.

NDSU offers drone photography class for the first timeOne of Bentz’s favorite parts of the class was a real-world application. The class took a field trip to Bismarck, her hometown, to take aerial photos of historical sites along the Missouri River. The photos will be used by an environmental planning class at NDSU that is working on plans for a visitor’s center.

“It’s very cool to be able to see everything from the air,” Bentz said.

After about 40 minutes, the batteries were wearing down and it was time to land the drones. Each flyer walked toward the orange landing mat. They focused on the controller, which held their smartphones and showed them what the drone was seeing. Their visual observers helped them get a sense of where the drone was overhead and how close it was to the landing spot.

They had the option to use the “return to home” feature to land the drone, but they chose to land them manually. First one, then the other gently touched down on the mat. They cheered.

It was a good morning’s work. They captured images of tree tops, a small cemetery, an abandoned building and a bridge, making progress on their image series.

Their work will be on exhibit Nov. 8-21 in the Renaissance Hall Flakoll Gallery, 650 NP Ave., Fargo.