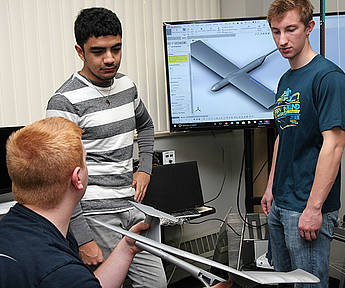 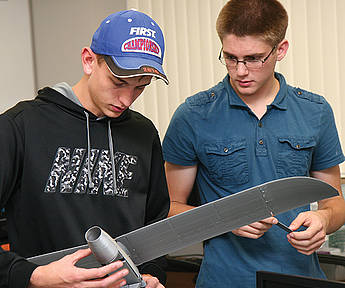 Six students sit at a conference room table. They are members of an interdisciplinary unmanned aerial systems team at NDSU, and they are absorbed in their work.

“How much power do we need to get this off the ground?” someone asks. They are building a six-foot long airplane from 3-D printed parts and items from online specialty stores.

They talk about engine amps, battery watts and calculations of how fast and how long the aircraft might travel before taking off. They look at computer screens and jot notes in spiral notebooks as the conversation intensifies. Every detail matters, and every detail is discussed.

The project is in the beginning stages, slowly building to a prestigious yearly collegiate contest on a Naval base in Maryland. The team is one of several that combines the talent of students from different STEM disciplines, such as engineering and computer science, to design and build unmanned aerial systems for competition against the top universities in the world.

The hands-on nature helps students show what they know and can do. “At the end of the day, most employers aren’t hiring people to come take quizzes and tests. They are hiring someone to come in and deal with the challenges that exist in their environment,” said Jeremy Straub, assistant professor of computer science and the team adviser. “Our project teams allow potential employers to see our students from a different perspective.”

Competing globally, adding job skills
The students building and perfecting unmanned aerial systems at NDSU already have been successful on an international stage.

Earlier this year, they competed at the International Aerial Robotics Competition in Atlanta, Georgia. It’s the world’s oldest aerial robotics competition for colleges and universities, and challenges students to design a drone and software that can carry out several tasks autonomously at the push of a button. NDSU students designed and built a helicopter drone with four rotors and earned the only Best Technical Paper award at that event.

“Learning to code outside the boundaries of my computer science classes and opening up my mind to the interdisciplinary aspects of engineering taught me more technical skill than I could have imagined,” said sophomore computer science student Abdullah Almosalami, who served as the team leader for the quadcopter project at the international competition. “One of the biggest takeaways for me was to never give up. There were so many moments where we thought we ought to just try it next year. But we came through. Those are the types of things that defines character. That’s why you go to college.”

Students benefit from the team activities in several ways. They learn detailed technical aspects of engineering and computer science by doing hands-on work. They model the drone on technology currently used in the field, become adept at using a 3D printer, and work hand-in-hand to overcome adversity and solve problems. They use the skills taught in the classroom to build a working machine that can carry out intricate commands.

All of it adds up to vital experience employers look for when hiring.

“I think our project helps as I move toward my profession by giving me the experience of working on a large-scale, open-ended task,” said freshman engineering student Jacob England, who is leading the airplane drone project. “It’s shaped my NDSU experience by forcing me to become more of a leader, to be more decisive and to not fear failure. These are lessons I needed to learn that will help me throughout my life and my next years at NDSU.”

Persevering over problems
The six students huddle around two laptop computers, scouring the internet for an engine to power their drone. They finally settle on a choice after some back-and-forth. By the end of the week, they should have the motor, battery and propellers ordered. They are on their way to beginning construction.

Some of the parts will be 3D printed in a Quentin Burdick Building lab. They have already started this process and the meeting stops to try and solve a problem they’ve been working to fix for a couple days. The whole team heads into the lab to check it out.

“I think the nose cone is stuck,” a student says as he opens the printer door.

Almosalami, who isn’t part of the airplane team but uses the lab for other projects, tries to pry the layers of plastic off its base with a tool. It won’t budge. Another student gives it a try. Nothing. It’s eventually released and the students are back in business. The entire team of eight students will meet for about an hour, two to three times a week in preparation for the Maryland competition in June.

Students pile back into the conference room to go over some details one last time.

“This team came together and was funded for the purpose of winning competitions,” England said. “That’s what we plan to do.”