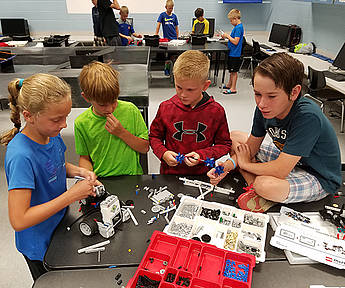 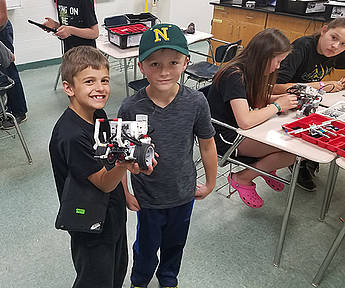 Ryan Swanson started hosting robotics camps to earn a little extra money over the summer. It was supposed to be a temporary gig, but now the company he created at NDSU could become his full-time job and inspire a whole new generation of engineers.

Swanson graduated in May with a degree in mechanical engineering. His company, COR Robotics, runs summer camps that get kids excited about science, technology, engineering and math, commonly known as STEM.

“The focus is to inspire them to pursue STEM degrees,” Swanson said. “Running the camps is a ton of fun and the kids are excited about science.”

FIRST, which stands for For Inspiration and Recognition of Science and Technology, was founded in 1989 to increase young people's interest and participation in science and technology. FIRST offers programs for kids in K-12, including a high school robotics competition that’s recognized as a varsity sport at many schools.

Swanson was introduced to FIRST during his junior year of high school in Becker, Minnesota, and the connections he developed on his high school robotics team helped lead him to NDSU. After several teammates enrolled in the NDSU engineering program Swanson knew exactly where he wanted to go to college.

“Best decision I’ve ever made,” he said.

At NDSU, Swanson founded the Bison Robotics Club and made a connection with the late David Wells, a long-time professor of industrial and manufacturing engineering. “He really spurred me to start my businesses,” Swanson said. “I would not have this company without his help.”

Swanson got COR Robotics off the ground thanks to the NDSU Innovation Challenge. It helped him make contact with Innovate ND, a program that helps fund, develop and coach North Dakota-based entrepreneurs. “I had to submit a 28 page business plan and it really forced me to figure out exactly what I want to do,” Swanson said.

The mission of COR Robotics is to inspire and educate the next generation of problem-solvers. Swanson developed the curriculum for the camps on his own and business is booming. This summer COR Robotics has 58 camps on the schedule and Swanson is in the process of hiring fellow NDSU engineering students to help out.

Most of his camps are held in Minnesota where FIRST has taken off. Swanson’s next goal is to help grow the FIRST program across North Dakota.

In March, Swanson presented his business idea at 1 Million Cups Fargo, a national program started by the Ewing Marion Kauffman Foundation in 2012 to educate, engage and connect entrepreneurs with their communities. The event helped him make new contacts and get more interest from possible investors. He’s also made a connection with the leadership team at FIRST who are excited to find out how they can help.

Swanson tells his parents he’ll do COR Robotics for the summer and then get a full-time job, but he’s hoping the company can fill that full-time role. His dream is to become the official summer camp of FIRST.

“FIRST is a powerful program that makes science and technology fun and gives kids a chance to meet and work alongside professional engineers,” Swanson said. “It’s our chance to educate and inspire the next generation of problem-solvers.”