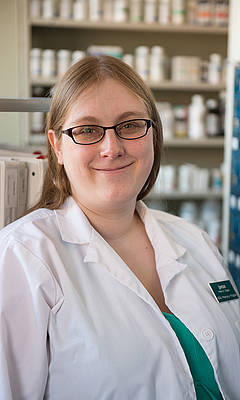 Last May, Jantze Lewis took her last final exam on a Friday. Her husband received his pharmacy degree from NDSU the next day, a Saturday. Then she gave birth to the family’s third child the Wednesday following finals week and commencement.

“At least she waited until after finals,” Lewis said, understatedly, of her baby girl’s arrival.

This fall, Lewis is entering her second year in NDSU’s professional pharmacy program where she, too, is working toward earning a pharmacy degree. She has a full schedule with school, family and work, but she knows she has the support of her professors and that the balancing act will pay off with a rewarding career.

She chose to study pharmacy because of her life-long interest in science and a job at a pharmacy. She likes mysteries and once considered a career in forensic science. However, she discovered she wanted to be a pharmacist after working at a CVS pharmacy.

“I like being able to help people find what they need and figure out how to use their medications,” Lewis said. “Working in a pharmacy, I’m able to apply what I’m learning as I’m learning it.”

Lewis’s husband, Steven, started NDSU’s pharmacy program first. He chose it for its reputation. He heard good things about the program from pharmacists in the area and he knew it had a good career placement rate. Ninety-five percent of the students who graduated from the program from August 2015 to May 2016 are employed.

It also helped that Fargo was close to family who had relocated to Fargo from Burlington, a town located in the northern part of the state near Minot. Jantze’s younger brother, Jerick, earned a mechanical engineering degree from NDSU in 2014. Her younger sister, Bree, is a freshman majoring in dietetics at NDSU.

Jantze started her education at Minot State University and then transferred to NDSU when Steven began taking classes. Jantze said the transfer when smoothly, in part because NDSU and Minot State are both part of the 11-member North Dakota University System. She completed her degrees in chemistry and criminal justice while starting her prerequisites for the pharmacy program.

The first year of pharmacy school was sometimes a refresher to what she was doing at CVS. Other days, she experienced something entirely new, such as learning how to compound IV bags in NDSU’s Thrifty White Concept Lab.

“I get a lot of hands-on experience here, Jantze said. “My husband has commented that with some of his clinical rotations, his preceptors said people from other pharmacy schools weren’t as prepared as the students from NDSU. I really feel like they do a good job getting us ready for the actual workplace.”

Faculty and staff also were supportive and flexible with the couple’s family responsibilities. In the spring, Steven was doing clinical rotations in Minot while Jantze was going to school, working and taking care of two children—all while pregnant. Professors let her bring her kids to class when her daycare was closed, and they helped her keep caught up after missing a few classes due to morning sickness.

Post-graduation, Steven is a floating pharmacist with CVS, moving primarily between Fargo-Moorhead, Detroit Lakes, Minnesota; and Minot and Bismarck, North Dakota. He has joined the ranks of NDSU-educated pharmacists serving the region. An estimated 90 percent of the practicing pharmacists in North Dakota are NDSU alumni. More than 600 students are enrolled in the six-year pharmacy program, which is accredited by the Accreditation Council for Pharmacy Education.

Jantze said it’s strange to not have both her and Steven going to school this fall. But she was ready for the fall semester to begin. “By the beginning of July, I’m usually ready for school to start. I get a little bored. I enjoy school and like to learn new things.”

Jantze is taking 18 credits this semester. Fifteen credits are considered a full-time student. She’s excited to begin learning more about vaccinations and how specific medications target diseases. The program will prepare her to become certified in North Dakota to administer vaccines.

And she’ll do it all while balancing family, work and school.

“My advice is to be organized and have a good support system,” Jantze said. “I get a lot of support from our daycare and staff and faculty. They’ve been great working with my husband and me.”