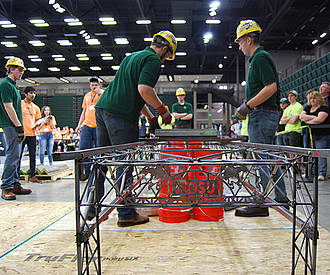 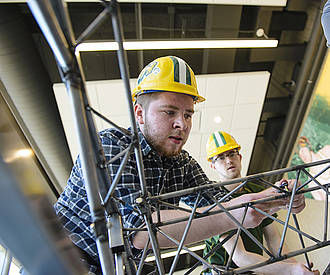 NDSU students have many chances to practice what they’re learning in real-world situations. A team of NDSU engineering students had a top-10 finish in a recent national steel bridge-building competition.

The Student Steel Bridge Competition provides experience in design, management, fabrication and teamwork for thousands of civil engineering students each year. Teams from participating schools build a 20-foot steel bridge spanning a seven-foot river as quickly as possible. The bridge must support 2,500 pounds without deflecting, or bending, more than three inches.

Max Schumacher, a junior majoring in civil engineering, said the team’s goal was to make the bridge extremely light and to be able to build it as quickly as possible.

“Those are the two areas we focused on, and I think our success proved that,” he said. “Overall, we wanted a well-balanced bridge in all of the categories.”

The experience gave the students a chance to apply what they learned in the classroom. The 10-member team started designing the bridge in the fall. The finished project was comprised of just 40 pieces and weighed a little more than 100 pounds.

“A complex design isn’t necessarily better than a simple one,” said team co-captain Aaron Anderson. “Our bridge design was relatively simple, but still performed very well. The difference is we had less room for error. By minimizing the number of pieces we had on our bridge and using a simple connection design, our bridge was able to compete with the best in the world.”

The team put in plenty of practice building the bridge. They were one of the top two finishers at a regional competition in April. Sixteen teams and more than 200 students attended the event, which was organized and hosted by NDSU’s chapter of the American Society of Civil Engineers and the NDSU Department of Civil Engineering.

Six team members built the bridge in less than six minutes at the regional event. The assembly process resembled a racecar pit crew. The team, wearing matching green shirts and yellow hardhats, split into two groups on opposite sides of the river, which was designated by masking tape on the floor.

The talking was minimal as they executed a task perfected through daily practice.

A flurry of parts was assembled and the two halves of the bridge met over the water in three minutes. Support braces were installed and the bridge was complete.

While the team was happy with its regional performance, they put their engineering minds together to improve the process even more. Jacob Roepke, who along with Schumacher will co-captain the 2017-18 bridge team, said they decided to tweak the build sequence before nationals. They added temporary piers and were able to use four builders instead of six. The reduction in labor reduced the project cost, resulting in a better finish.

NDSU historically has been competitive, winning nationals in 1995, 2002, 2004, 2006, 2007 and 2010. This year’s team placed eighth out of 39 teams, finishing ahead of University of Wisconsin, Madison, University of Michigan and Kansas State. NDSU finished fourth in lightness, fifth in construction speed, sixth in economy, eighth for display, 15th in efficiency and 31st in stiffness. Each category is assigned a financial value and total project costs determine the overall winner.

The team is already applying the lessons learned. Roepke said he is taking the experience from the classroom to the competition field to the job site. His summer internship is working on a bridge spanning the Mississippi River in Winona, Minnesota.

Anderson, who graduated in May, is a design engineer at Stonebrooke Engineering in Burnsville, Minnesota. He’s taking lessons from the competition to his career. “All firms will have a standard way to do things, but it is our job to take an outside look and ask why,” Anderson said. “What if there is a better way to do things that could give the public a better finished product for less money, or could take time off the construction phase of a project by changing something small? I learned that there isn’t necessarily one way to solve a problem.”