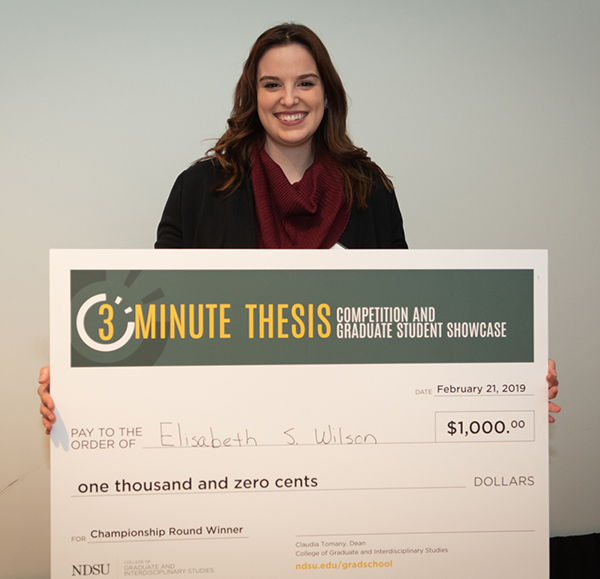 Wilson presented “Micro-climate Impacts Nesting Choice and Success of Alfalfa Leafcutting Bee,” in which she explained how temperature within nesting boxes can greatly affect the bee population. Her research found that by facing the boxes to the northeast rather than the southeast can mean earlier nesting for the bees and more offspring, ultimately saving farmers money. Her faculty adviser in the research is Julia Bowsher, associate professor of biological sciences.

Wilson receives the $1,000 grand prize. She described the competition as exciting and beneficial.

“I’ve gained the ability to think about my research differently. I like being able to present to a large group of people about what I find important in the big picture – that’s the best part of the Three Minute Thesis,” said Wilson, who is from Indianapolis and is the daughter of Keith and Laura Wilson of Carterville, Illinois. “My first draft, what I thought was the bare minimum, was nine minutes long. Cutting it down to three minutes was a real challenge.”

Wilson will advance to the Western Association of Graduate Schools regional competition in Tucson, Arizona.

The competition began with 57 contestants giving presentations in eight preliminary rounds. The winner of those rounds moved on to the finals.

“How Do Climate-driven Changes Affect Our Water Resources?”

Silk Bubbles to the Rescue

Preliminary round winners received a $250 prize.

“All of our contestants did a fabulous job,” said Brandy A. Randall, associate dean of the College of Graduate and Interdisciplinary Studies and professor of human development and family science. “This really showcases the quality research our graduate students are doing and we’re proud of them.”

The recipient of the People’s Choice Award for the competition was civil engineering student Mohsen Tahmasebi Nasab.

The competition was held in conjunction with the Graduate Student Showcase held in the Memorial Union Ballroom.

The Showcase People’s Choice for Best Display went to Kutay Yilmaz for “Grain Sorghum can be a Viable Alternative Crop for North Dakota.” Yimaz’s adviser is Burton L. Johnson, professor of plant sciences

Australia's University of Queensland developed the first Three Minute Thesis competition in 2008, and the concept has spread to institutions around the world. More than 600 universities in more than 65 countries now hold competitions.