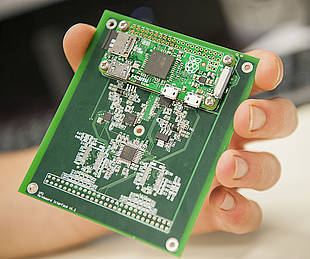 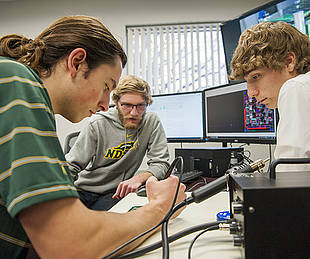 NDSU students are putting the finishing touches on a project that soon will be rocketed into space.

They are working on a CubeSat, a small box-like satellite that is less than 4 inches on each side. It is the first satellite developed in North Dakota that will be launched into orbit.

The spacecraft, which goes by the operational title of OpenOrbiter I, is being built by an interdisciplinary team of about 130 graduate and undergraduate students from NDSU and the University of North Dakota. They are majoring in a variety of areas, including computer science, mechanical engineering, physics and electrical engineering.

“The CubeSat is going to spend several months in low earth orbit. Basically, it’s going to perform science and engineering experiments, collect data and send the information back to Earth for us to analyze,” said Jeremy Straub, NDSU assistant professor of computer science and project leader for the collaborative work between the two universities. “By and large, we are ready.”

The satellite was completed and tested in March. It will be launched in early to mid-summer of 2017 through NASA’s Educational Launch of Nanosatellites Program on a resupply rocket to the International Space Station. The CubeSat will be released into orbit shortly thereafter.

The tiny orbiter will have solar panels on the outside, with small metal rails on each side. “If you’re familiar with the ‘Star Trek’ movies, it looks like a miniature of the cube spacecraft of the Borg alien invaders. Only ours is a little friendlier,” said NDSU junior Brandon Rudisel, a computer science major from Fargo. “Our CubeSat fits in the palm of your hand, but there’s a lot you can do with such a small amount of space."

Each student is working on a specific part of the orbiter. Rudisel is focusing on safety features so software can’t be uploaded that could damage the CubeSat. “We don’t want it to become a brick,” he said.” We don’t want something to make it inoperable.”

Rudisel is working on an on-demand app for miniature computers called Raspberry Pis– the satellite will carry two to four of them. “They are full-fledged computers that cost about $5 each and are the size of a credit card,” Rudisel said. “They are really remarkable.”

Jacob Reimers, a junior physics major from Jamestown, North Dakota, is researching different aluminum alloys, looking for the best material for in-space 3D printing. A testing version of an in-space 3D printer will be carried on OpenOrbiter I, which is about 5 centimeters by 5 centimeters by 8 centimeters. The goal is to find out how certain materials work in the microgravity, temperatures and radiation of space.

“We’re accomplishing something big here – that’s an awesome feeling,” said Reimers, who has always had an interest in rocketry and space. “In the future, I’d like to work on research or design projects with NASA or SpaceX. So, this work is a good start for me.”

The students’ experience gives them a real-world foundation as they move into the workplace. “The students are putting what they’ve learned in the classroom into practice. Employers are looking for people who can work on real challenges,” Straub said. “These students can say they worked on a satellite. I think that’s something employers will be impressed by.”

For many of the students, the research is already offering additional opportunities. Rudisel, for example, presented at the SPIE Defense + Commercial Sensing Conference in Anaheim, California. SPIE is the international society for optics and photonics.

There also is the added pride of being part of something that is a first for the state.

“Our project is setting a milestone, because it’s never been done from North Dakota before,” Reimers said. “To me, it feels like we’re exploring a new frontier.”