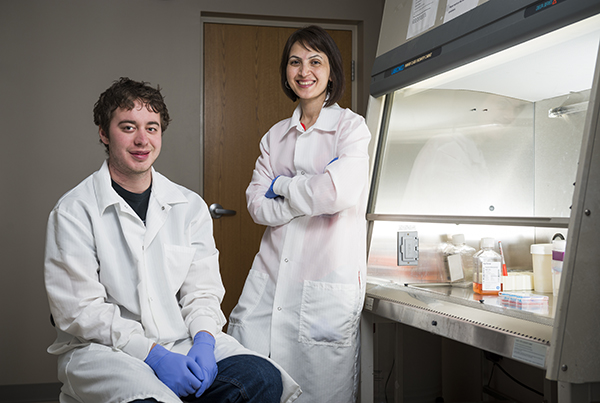 A microchip and a single drop of blood could hold the key to early detection of pancreatic cancer.

“The Innovation Challenge gave me the opportunity to grow, learn and explore new possibilities,” said Karandish, a fourth-year doctoral student in pharmaceutical sciences from Iran. “The competition compelled me to come out of my comfort zone, develop new skills and increase my confidence.”

The project, titled “Single Cell Diagnosis,” could be a breakthrough for early detection of pancreatic cancer, which can be hard to diagnose because it has few early symptoms.

The innovation could become an at-home early diagnostic kit for pancreatic cancer, and could eventually be modified to detect other types of cancer in early stages.

“By participating in this challenge, I learned a lot about how to give presentations and how to get other people interested in what I’m doing,” said Froberg, a physics doctoral student. “I think these skills will be very valuable later in my life and career.”

The winner in each of the Innovation Challenge’s categories received a $5,000 prize. Second place earned $1,000 and third place earned $500. Showcase attendees also voted during the semifinal round for a $1,000 “People’s Choice Award” winner.

Innovation Challenge is presented by the NDSU Office of the Provost, in partnership with the NDSU Research and Technology Park.

Other recognized projects and students include:

First place – “Radio Frequency Pacemaker,” a project to develop a fully wireless and batteryless pacemaker that can be implanted directly into the heart, by Sajid Asif, an electrical engineering graduate student from Fargo.

Second place – “Off the Grid,” a mobile app to help people disconnect from their cellphones worry-free and shift away from a seeming cultural obligation to be constantly connected, by Mathias Hennen, a junior graphic design and marketing major from Kimball, Minnesota, and Tanner Bjorlie, junior mechanical engineering major from Fargo.

First place – “NDSU Markerspace,” a space on NDSU’s campus that will allow students from all areas of study to meet and create together, by Theodore Young, a sophomore industrial engineering major, and Kyle Stapleton.

“Write Your World,” a program that connects New American and local women through weekly writing groups, by Samantha Hamernick, a senior English major from Lino Lakes, Minnesota, and Ibitssem Belmihoub, a doctoral student in writing, rhetoric and culture from Algeria.