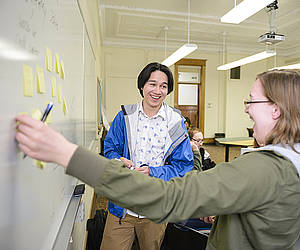 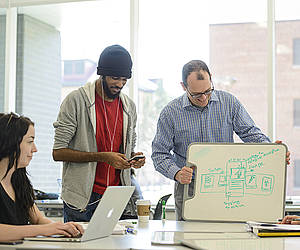 NDSU students have a variety opportunities to improve their writing skills and receive recognition for their efforts, including the recent W-Challenge competition.

Outstanding undergraduate student writers were recognized May 1 as the top finishers in the competition, which received 120 submissions in the following categories: academic, creative, professional and writing in foreign language. Winners received prizes worth up to $200.

“The many submissions from students across the university show the amount and breadth of writing that our undergraduate students do,” said Lisa Arnold, assistant professor of English and director of First-Year Writing. “NDSU students are proud of their writing, as they should be. The competition helps promote that writing is an important tool, while also recognizing and rewarding students for the writing they do in and out of their classes.”

Foreign Language – English
• First place: Linh Tran, a freshman dietetics major from Vietnam, for “A Beauty Mark
• Second place: Jasmin Kaempfer, a sophomore who is majoring in marketing from Germany, for “Behind the Wall of Glass
• Third place: Esperance Mulonda, a sophomore biological sciences major from the Democratic Republic of the Congo, for “My Dear Little Sister

Academic writing
• First place: Andrew Wolf, a senior majoring in philosophy and English, from Bismarck, North Dakota, for “Give Ear to this, Job: How Elihu Privileges Consequentialism Over Retributivism in the Book of Job”
• Second place: Annise Montplaisir, a senior majoring in management communication and international studies, from Moorhead, Minnesota, for “Examination of the Successful Attributes of the Saratoga Special”
• Third place: Kirbie Sondreal, a junior majoring in public history and history from Reynolds, North Dakota, for Remembrance and Reparation: The Clayton Jackson McGhie Memorial”
• Honorable mention: Paige Alexander, a junior strategic communication major from Esmond, North Dakota, for “Proposal”