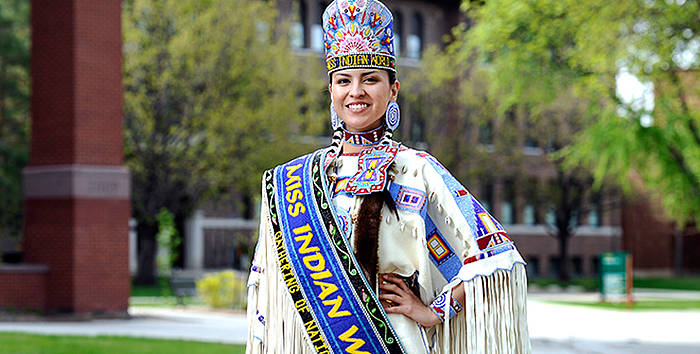 The Miss Indian World sash had just been settled on Cheyenne Brady’s right shoulder. The weight of the elaborately beaded sash focused her attention, made it real that her name had just been called.

She closed her eyes, bit her lip and thought, “Enjoy this moment.”

Brady, a senior at NDSU, had just been crowned Miss Indian World. It was a moment that had been in the making since her first memory of the Gathering of Nations, one of the largest powwows in the United States, and the women who participated in Miss Indian World, the largest and most prestigious pageant for Native American women.

When she opened her eyes on that April day in Albuquerque, her family was making their way toward her. Someone wrapped a turquoise-colored shawl around her shoulders. She heard an honor song. She realized she had just joined the ranks of the women she admired for their strength, knowledge and commitment to their communities.

Brady was judged on her cultural knowledge through public speaking, traditional talent, dance, interview and essay. As Miss Indian World, she serves as a role model and represents Native Americans and Native American culture at events around the world.

NDSU student Cheyenne Brady was crowned Miss Indian World at the largest and most prestigious pageant for Native American women. For the next year, she will represent Native Americans and Native American culture at events around the world.

“This is not about me,” she said. “I'm a vessel for all our tribes to get out there and raise awareness.”

Brady, who is from New Town, North Dakota, is a member of the Sac and Fox tribe and has ancestors from the Cheyenne, Pawnee, Otoe, Kiowa, Apache, Hidatsa, Arikara and Tonkawa tribes.

She grew up following the Miss Indian World pageant and looking up to the women who participated. She became eligible to run at age 18 and entered the pageant in 2011. She didn't win the title that year, but she won the dance and essay components as she did this year. “I knew I would go back,” she said. “I took the next four years to learn more about who I am and feel more prepared to do a better job.”

She studied psychology at NDSU and discovered a career path that combines her interest in health care and her desire to serve American Indian communities. She graduated on May 16 and will continue her studies in NDSU's Master of Public Health program, which has the only American Indian health specialization in the country.

In her day-to-day life, Brady is a homebody. She spent the four months before the pageant going to class, studying and finishing the traditional Southern Cheyenne buckskin dress she wore for the pageant.

It took her three years to design and make the dress by hand. Her grandpa and uncle served as consultants on the design.

After the pageant, Brady returned to NDSU for the final weeks of the semester. She didn't say anything about her achievement-she was raised to be humble-but her professor did.

Jim Council, professor of psychology, noticed a story and photo in the local newspaper. He brought it to share with Brady's capstone psychology class. After she spoke about her experience, the class gave her a hearty round of applause.

“Everyone was really happy for her,” Council said.

Brady participated in numerous interviews with North Dakota and Fargo-Moorhead media. “I am grateful for the support in the Fargo area,” she said. “The support and feedback has been amazing.”