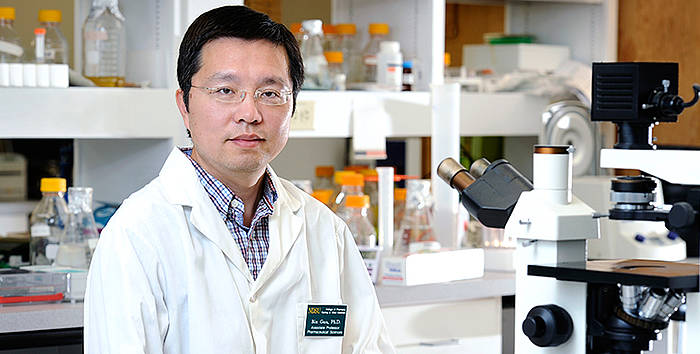 A North Dakota State University researcher is receiving one of the most competitive and prestigious grants available from the National Institutes of Health.

Bin Guo, associate professor of pharmaceutical sciences, is receiving a $1.35 million Research Project Grant, also known as an RO1 grant, from the National Cancer Institute of the National Institutes of Health. He is using the grant to develop a treatment system for attacking metastatic colorectal cancer cells, suppressing their growth and allowing conventional chemotherapy drugs to eliminate them.

Scientists from the nation’s most renowned universities and programs apply for RO1 grants, and competition for funding related to oncology research is especially rigorous.

“This NIH award is testament to the importance of Dr. Guo’s work and the caliber of the competitive health research – that is being recognized on a national level – conducted at North Dakota State University,” said NDSU President Dean L. Bresciani. “It’s one more example of how serious our scientists are about finding solutions that make a difference in people’s lives.”

Bin Guo, associate professor of pharmaceutical sciences, is receiving one of the most competitive grants available for his work on developing a highly targeted treatment system for colorectal cancer.

Guo’s research started with the understanding that people with low levels of vitamin D have a significantly higher risk of developing colorectal cancer. He and his team studied genes that are regulated by vitamin D, and through a screening process identified a vitamin D-activated micro ribonucleic acid, or microRNA, that suppresses colorectal cancer.

MicroRNAs are very small RNAs that suppress the function of other genes, including genes that create proteins that stimulate cell growth.

“We found that this specific microRNA, miR-627, is the only one that is activated by vitamin D,” Guo said. “If we can deliver it into the cells, then we can stop the cancer.”

The challenge, he said, is that microRNAs are fragile and are easily destroyed by enzymes in blood. In this phase of research, the team is designing and constructing a highly stable nanoparticle platform to deliver the microRNA. The goal is to use an antigen that is only expressed by cancer cells as a guide so therapeutics will be delivered specifically to the cancer cells without accumulating in the liver, lungs or other vital organs or causing the side effects typical to most chemotherapies.

“Dr. Guo’s approach to finding a more effective and efficient treatment for colorectal cancer is creative and innovative,” said NDSU College of Health Professions Dean Charles Peterson. “This is another milestone in a stellar career that has already contributed new, valuable knowledge to the fight against cancer, and we’re excited to see the results of the next phase.”

According to the American Cancer Society, colorectal cancer is one of the most common cancers diagnosed and is among the leading causes of cancer-related deaths in the United States.

NDSU is one of the nation’s top 108 public and private universities in the Carnegie Commission on Higher Education’s elite category of “Research Universities/Very High Research Activity.”