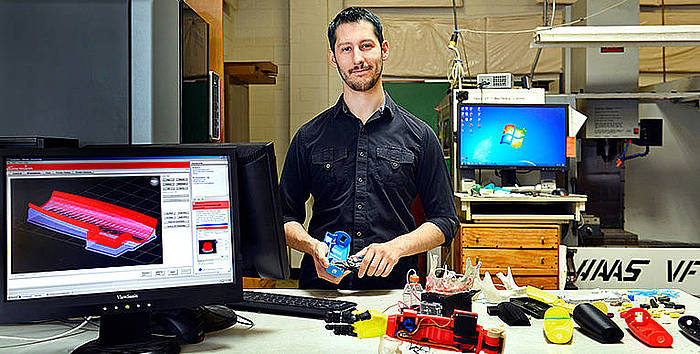 A North Dakota State University student has been named one of the nation’s top 30 future manufacturing leaders under the age of 30.

Andrew Dalman is on the “30 Under 30” list of professionals and students in science, technology, engineering and mathematics fields. SME Advanced Manufacturing Media selected honorees based on nominations from around the United States. The list appeared in the July 2015 issue of Manufacturing Engineering.

SME, formerly known as the Society of Manufacturing Engineers is the professional society for manufacturing engineers and companies.

Dalman earned his bachelor’s degree in manufacturing engineering from NDSU in May 2015 and is now an NDSU master’s student in mechanical engineering. He said he was honored to be selected and recognized for work he loves.

“I just really want to do cool stuff, whatever that happens to be,” Dalman said. “Some people paint, other people play music. I do stuff like this. It’s my outlet.”

David Wells, NDSU professor of industrial and manufacturing engineering, nominated Dalman. “When I think of what a student who is going to be a professional engineer should be like, I think of Andy Dalman,” Wells said. “He’s creative, curious and highly intelligent, and he’s also very driven. Everything he’s accomplished so far bears that out.”

Andrew Dalman’s inclusion in an elite group of future manufacturing leaders is another example of NDSU students successfully competing at the national level.

Dalman was selected for the prestigious University Innovation Fellow program through the National Center for Engineering Pathways to Innovation as a junior. At the time, he was a member of a Bison Microventure team working to develop a ceramic artificial jaw implant. Dalman designed the 3-D printing techniques, or additive manufacturing techniques as they’re called in the industry, for creating the outer shell. The team has filed for a U.S. patent for the process.

The same team is now developing an artificial bone material that will allow for accurate testing and development of medical devices and training for surgical procedures. Their work could lead to the ability to create replicas of bones so surgeons can conduct destructive surgical tests before making any incisions into patients. The material also could lead to more precise customization of implants for patients.

In a separate project, Dalman was part of a four-person team at NDSU that created a myoelectric prosthetic arm for kids that includes a wrist, elbow, hand grasp and a pinch. The team designed the arm for a three-year-old, and it can be 3-D printed at any scale as the child grows. It costs about $400 to print the arm's parts, compared with similar prosthetics that can retail for more than $30,000.

The project was one of only 10 around the world to receive an inaugural OZY Genius Award, which included a $10,000 stipend for developing it further. OZY Films is documenting the NDSU team’s work throughout the summer for inclusion in a documentary to be released this fall.

The team members are starting a company called Protosthetics to provide a sustainable solution for designing, manufacturing and distributing low-cost, high-quality prosthetics to children and families.