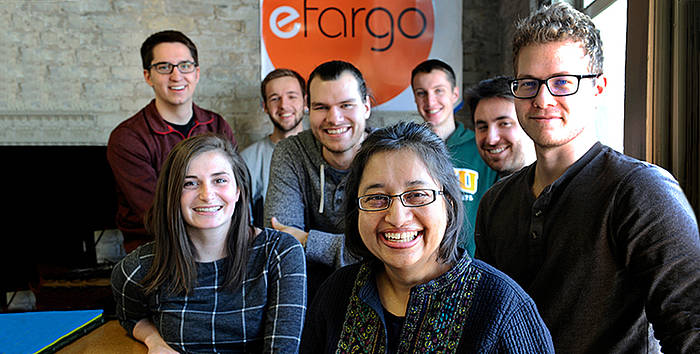 Fargo’s energy consumption is down thanks to the efforts of the eFargo partnership, which includes the city of Fargo, NDSU, Cass County Electric Coop and Xcel Energy.

Their efforts have been so successful that Fargo is now in third place in the Georgetown University Energy Prize competition, which challenges cities throughout the country to find innovative ways to improve energy efficiency and offers a $5 million prize. Since January 2015, Fargo residents and organizations have saved more than $3.2 million in utility bills.

This is another example of NDSU-community collaborations that meet a need and make life better. The partnership was born from citizens asking for a more energy-efficient city and from NDSU faculty member Malini Srivastava’s vision for cities that produce fewer of the greenhouse gases that affect climate change.

Srivastava, who is project lead for eFargo, worked as an architect for 15 years before joining NDSU as assistant professor of architecture. She designed new energy-efficient buildings, but saw existing structures, which use 40 percent of energy produced, as a major opportunity to make a big difference fast.

Srivastava secured a Bush fellowship to implement and test innovative strategies to educate and engage people in energy-efficiency practices that are being tracked by the competition. Her research on Fargo’s strategies could inform how other cities approach the issue in the future.

NDSU often collaborates with business, government and local and regional communities to solve real-world problems. Fargo’s success at reducing energy consumption and being competitive in a national energy competition is the result of a partnership that includes the city of Fargo, NDSU, Cass County Electric Coop and Xcel Energy.

Many energy-efficiency practices are relatively easy, such as running the dishwasher at non-peak times or switching from lightbulbs to LEDs. Yet past research has shown that people are reluctant to adopt these practices even though they will directly benefit through lower utility bills.

Srivastava wanted to test whether gaming would affect behavior. The team developed the eFargo game that included educational content, energy-efficiency tasks and prizes, such as gift certificates to home improvement stores. More than 300 residents participated during eight weeks.

eFargo challenged Fargo and West Fargo K-12 schools to reduce energy consumption over six weeks. eFargo provided materials to help teachers incorporate energy-use concepts into the curriculum and maintained a dashboard, so schools could see whether their actions, such as turning off lights and unplugging vending machines, were having an effect.

Fargo’s Roosevelt Elementary won the challenge, reducing the school’s energy consumption by 29 percent. They achieved this by educating students about energy use and empowering them to make changes through their knowledge and creativity.

eFargo has partnered with the city of Fargo to design and build four affordable, high-efficiency houses to demonstrate these types of homes are attainable. NDSU architecture students have designed the houses and secured permits. Construction will be scheduled when a partnership with a builder has been finalized.

NDSU students have worked alongside Srivastava to research, design and implement eFargo, gaining real-world experience in the process. Her architectural design course, for example, designed the high-efficiency houses and secured permits.

“The students’ hard work has made eFargo as powerful as it is,” Srivastava said.

Suggest a story that highlights NDSU as a land grant university. We may not use every suggestion, but we'd like to hear from you.