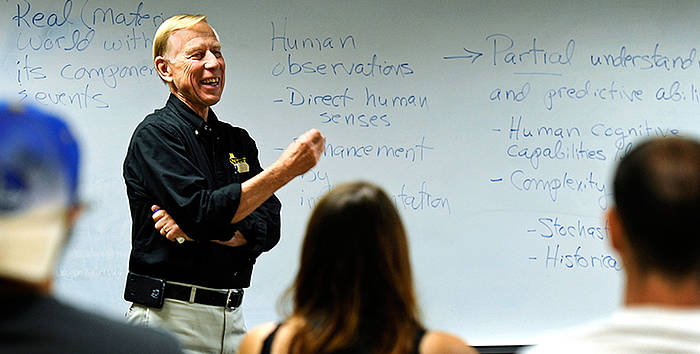 Students who studied under Gary Clambey 30 years ago enjoyed the experience so much they decided to start a scholarship in the professor’s name.

The NDSU graduates never forgot Clambey’s irrepressible enthusiasm or his ability to get a room full of young adults excited about science.

The faculty-student relationship was an important part of the students’ NDSU experience, so they created the Gary K. Clambey Biology Scholarship in 2001.

NDSU faculty engages students in the classroom with rigorous and supportive classroom experiences. A prime example is Gary Clambey, who has influenced the lives of thousands of successful students for more than 40 years at NDSU.

George Linz and Laurie Fortenberry chose to give the scholarships anonymously for more than a decade, but came forward when Clambey announced his upcoming retirement. They wanted him know he had made a difference in their lives and the lives of many other NDSU students.

“The courses I had from him were the foundation for me to continue on with a successful career as a blackbird biologist,” said Linz, a research wildlife biologist at the United States Department of Agriculture. “The way he treats students, and people in general, makes me think he must have been brought up in a wonderful environment.”

Clambey had been on the other side of the classroom as a student at NDSU, where he earned bachelor’s and master’s degrees in botany. He earned his doctorate at Iowa State University, served in the Army Medical Department during the Vietnam War and taught at Fergus Falls Community College before returning to NDSU as a faculty member.

During his 40 years at NDSU, approximately 12,000 students have gone through his classes. His courses are challenging, but fair. His friendliness and love of teaching have helped him connect with thousands of students who have gone on to lead successful lives.

“Many of our students come in very competent and very likely to succeed because they want to develop and they have a great interest in science,” Clambey said. “But some of our greatest success as educators comes in helping those students who may be struggling a bit. Watching those students succeed is what got me interested in teaching in the first place.”

As fall semester starts, it’s hard to imagine Clambey is about to close the book on his career. The materials for his ecology and biogeography courses are perfectly aligned on his desk. He’s meticulous in his preparation. Everything has a place and a purpose. And he’s excited as ever to get back in the classroom.

“I will certainly miss the interaction with students on a regular basis,” Clambey said. “I’ve expected quite a bit of them, but I’ve been clear on what to expect from me so there are no surprises. And I’ve tried to be open and accessible. It’s been interesting to see what students go on to accomplish.”