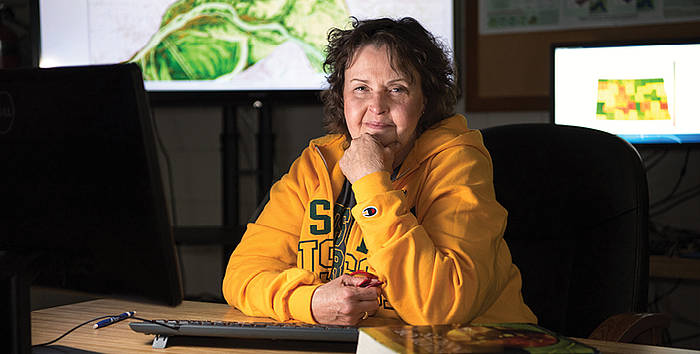 NDSU doctoral student Jackie Stenehjem hopes her research will help a North Dakota city with a long-standing battle. That fight is the annual struggle against hordes of mosquitoes in Williston, North Dakota, a community she called home for 40 years.

Mosquitoes are a worldwide concern. As they bite, some species can transmit West Nile virus, Zika virus, yellow fever virus, malaria and other diseases.

“This type of research data can be used by anybody, anywhere, to predict mosquito breeding sites after flooding,” Stenehjem said, in the hope vector control specialists around the globe consider using the technique she developed.

NDSU graduate students have many opportunities to participate in leading research in their areas of interest. For decades, Jackie Stenehjem has been active in the battle against mosquitoes in her longtime home of Williston, North Dakota. Now, her doctoral research is making an important contribution in that struggle.

In the Williston area, mosquitoes have been an issue for decades. Stenehjem’s personal involvement began in the late 1980s and through the 1990s, as an active member of the “Bugbusters.” The local group of mothers was concerned about the disease-spreading pests and the strong pesticides that were then used to combat them.

“Everyone worried about all the mosquitoes,” she explained. “You couldn’t walk to the grocery store or go from your car to the house without running because the mosquitoes were so bad.”

The problem lies with the topography of the region. Williston is located along the Missouri River, with a large floodplain south of the city. Vector control personnel face a difficult challenge.

“There are more than 100,000 acres in the floodplain. There is very little access for vehicles or boats, and it’s difficult to walk because there are areas with quicksand-like sediment. The whole area is considered a wetland and it's a perfect breeding ground for mosquitoes,” Stenehjem said, noting vector control crews also contend with rattlesnakes and mountain lions.

Stenehjem is a former faculty member at Williston State College who taught anatomy and physiology labs, medical terminology and other courses for 18 years. She also served as a member of the Williston vector control board for many years.

Stenehjem had practical experience in mosquito control, but felt she needed to learn more about the insects. So, she applied to the NDSU Graduate School to earn an advanced degree in entomology.

Merging that material with NASA satellite imagery and Geographic Information System technology, Stenehjem created a series of maps to predict what areas will flood and become breeding habitat for mosquitoes. That way, vector control crews can pinpoint trouble spots and eradicate the insects before they can fly.

“I delivered flood predictive maps for every 3 inches of increase in the level of the river,” Stenehjem said, explaining the elevation of the Missouri River at Williston fluctuates dramatically each spring and summer, which is a major reason for Williston’s mosquito problem. “Predictive flood maps are a new way of trying to find mosquito breeding habitat for vector control purposes.”

“This research has been rewarding and fascinating,” she said. “Williston Vector Control requested this research. My goal has been to help them, and earn a degree.”

Stenehjem believes strongly in the concept of lifelong learning and serves as an example.

Her years of work came under the mentorship of NDSU professors of entomology Mark Boetel and David Rider, among others. They praise the research and Stenehjem’s tenacity.

“Jackie’s energy, persistence and resolve to help the people of Williston and to complete her degree requirements at NDSU have been nothing short of amazing,” Boetel said. “NDSU faculty, office staff and her fellow graduate students also have appreciated having Jackie as part of the entomology family during the past several years. As a nontraditional student, she has added a valued dimension to the diversity of our department’s graduate student body.”

Rider said Stenehjem took full control of the project. “Jackie did this – she made calls and contacts with people from all over the U.S. who were experts on mosquitoes and on the Geographic Information System,” he said. “It did not take her long until she was talking about methods and research beyond my expertise.”

Stenehjem appreciates the support she received during her education at NDSU. “I did most of my graduate courses and research from Williston,” said Stenehjem, who recently moved to Fargo with her husband, Mark. “NDSU has been absolutely wonderful working with me as a distance student. Everyone in the department was so willing to help and try new things.

“This has been one of the best experiences of my life. It’s been so interesting, exciting, fun and challenging,” Stenehjem said.