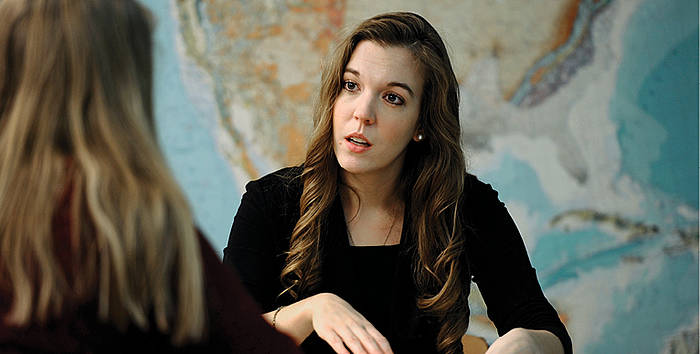 North Dakota State University senior Jenna Murphy is a word person, a communicator. She’s an English major who sees clear, concise writing as both an art and an essential element to success in any career.

Ken Lepper, professor of geology, is a scientist, environmental physicist and geologist.  His research specialty involves optical dating, a method used to accurately figure out the age of some of earth’s natural features.

Murphy and Lepper recently combined their different interests to help geology students develop discipline-specific writing skills that will be relevant as they move into their careers. The project helped Lepper envision a new way for students in the sciences to improve communication skills. And it gave Murphy an opportunity to develop research skills.

“This project helped me develop a lot of professional skills,” Murphy said. “I was able to teach on an individual basis and present my work in a public setting. It opened up a whole new world for me.”

NDSU students have the opportunity to get directly involved in research. English major Jenna Murphy collaborated with a professor on a research project that helped geology students improve their discipline-specific writing.

Murphy and Lepper’s collaboration is another example of opportunities NDSU students have to get directly involved in research.

The idea of an interdisciplinary research project started to form in one of Lepper’s geology classes where Murphy was a standout student. He knew she was an English education major at the time and that she worked in the Center for Writers helping students from across the university strengthen their writing skills. Geology students were taking a writing class focused on science disciplines, but Lepper believed students in his mid-level geomorphology (the study of the origin and evolution of earth’s physical features) course would benefit from instruction tailored to writing for a geology-specific audience.

“Our overarching motivation is that science students need practice writing in a discipline-specific context,” he said. “Jenna was tremendously helpful in helping me bridge the language gap that can exist between science and humanities.”

Murphy helped come up with writing assignments to include in geomorphology labs, established writing goals for the assignments and evaluated student progress and improvement.

Murphy presented the project at the Geology Society of America’s annual meeting in Denver. She also will present at the National Conference for Undergraduate Research in Memphis, Tennessee, this spring.

“Good writing skills are essential in any career,” Murphy said. “One hundred percent of students said in their exit surveys that they will use the writing skills they learned in Dr. Lepper’s class in the future. That speaks to the importance of the research and the power of good communication.”