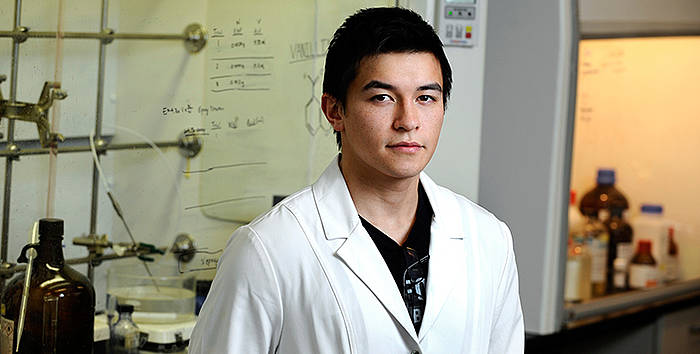 The scent of fresh vanilla hangs in the air as Josh Bernier works in the lab. The smell is the product of his research, but Bernier also is hoping it’s the sweet smell of success.

Bernier is working on a novel project to turn a waste product produced by making paper into a cost-effective and environmentally friendly substitute for petroleum compounds in paints and other coatings. As an added bonus, the process also creates a synthetic compound that releases the smell of vanilla.

Bernier is one of many undergraduate and graduate students involved in world-class research at NDSU. Some of the top researchers in the country are on campus looking for ways to solve the world’s biggest problems, and in many cases, students like Bernier are helping in big ways.

“Josh immediately adapted to life in the laboratory and could be seen in the department as often as our graduate students,” said Dean Webster, professor and chair of coatings and polymeric materials, and the lead on Bernier’s project. “He understands the science he is working on very well and is able to clearly communicate it to others.”

Graduate and undergraduate students at NDSU are directly involved in world-class research. Senior Josh Bernier is one of those students, looking for a way to turn a paper byproduct into an environmentally friendly substitute for petroleum in paints and other polymers.

Bernier is a chemistry major. But he began working with Webster on research in the Department of Coatings and Polymeric Materials almost immediately after he arrived at NDSU, despite the fact that he knew nothing about the subject. He first learned about the coatings and polymeric materials department during a campus visit.

It just sounded interesting. Bernier was curious and wanted a challenge. It was a perfect match. Webster placed him on a project with graduate student Alison Rohly. Bernier credits Rohly with pushing him to take a different look at the research they were conducting – which also prominently featured vanillin – for his own project.

Bernier’s current research focuses on lignin, a waste product produced by the manufacture of paper, as a petroleum replacement.

The project could have far-reaching effects in the world of coatings and polymers by helping to provide a safer alternative to products most people come into contact with every day.

For example, paints that include petroleum are considered by the United States Environmental Protection Agency to be one of the top environmental hazards because they can release harmful chemicals long after they are applied. Petroleum-based paints also need proper disposal to reduce environmental risks.

A solvent-and-petroleum-free paint using Bernier’s organic compound would have limited environmental impact. Webster and Bernier plan to patent the materials created by the research.

Bernier was awarded second place in the POLY division for a poster presentation of his research this month at the American Chemical Society National Meeting and Exposition in San Diego. He said his research garnered quite a bit of attention at the conference because of its potential.

“Josh’s research experience will open many doors for him,” Webster said. “If he decides to pursue graduate studies, having laboratory research experience will set him apart from other applicants. There are also potential opportunities for a career in industry, and many companies that either make or use paints and coatings actively recruit NDSU students.”

Bernier plans to work in the polymer coatings industry or in a lab following his graduation in December.

He said his experience in Webster’s lab has increased his interest in pursuing graduate school in the future.

“I never experienced anything like this before I got to NDSU,” Bernier said. “Everything has gone really well for me and it’s due to NDSU, Dr. Webster and Alison. It’s been amazing.”