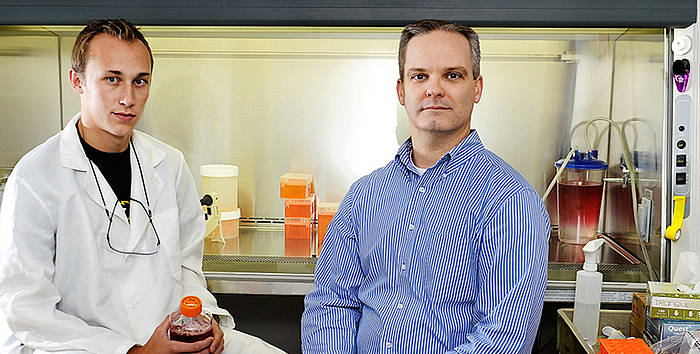 An NDSU student is getting the chance to help find a cure for cancer. And all it took was an email to get his foot in the lab.

One of Joshua Krank’s first-year classes featured a guest speaker who researches cancer. Krank was so intrigued by the 10-minute talk that he emailed the assistant professor to find out if he could take part in the work. He got a reply immediately and now is an example of the type of undergraduate research NDSU students are involved in on a daily basis.

He does lab work discovering what proteins are present in a cell and manipulating the cell’s gene expression to vary the amount and types of proteins it produces. He also measures the amount of sugar cells consume. The data tell Krank and Wilkinson how the cells are functioning.

“In effect, I’ve learned how to conduct research,” Krank said. “Dr. Wilkinson lets us play an active role and learn from our occasional mistakes. That’s vital for my development and for those of the graduate students.”

They are studying the mechanisms behind the body’s natural and orderly cell death and creation. Wilkinson and his team of Krank and two graduate students are studying how the cellular suicide known as apoptosis contribute to the growth of cancer and other human diseases.

NDSU students get directly involved in world-class research. This student works with an NDSU researcher who studies cell death and how it affects the growth of cancer.

Certain types of molecules control cell death. Some molecules—proteins, in particular—can keep cancer cells alive longer than they should.

Wilkinson is studying how a protein called apoptosis-inducing factor and its cellular partners work together to help prostate cancer cells grow. The project is one of 82 funded by the American Cancer Society aimed at understanding how prostate cancer develops, the details of which remain somewhat of a mystery.

“Cancer isn’t one disease,” said Wilkinson, an assistant professor of chemistry and biochemistry. “Cancer is 1,000 different diseases. The challenge is figuring out how to identify in any one specific patient what kind of cancer they actually have, and then, based on that identification, how to tailor therapy in order to achieve the best possible outcome for that particular patient.”

Exactly why is what Wilkinson and his students, including Krank, are trying to figure out.

“Our logic is that if we can figure out how to use apoptosis-inducing factor protein as a target for turning off cancer cell energy supplies without affecting normal cells, we may be one step closer to curing cancer,” Wilkinson said.