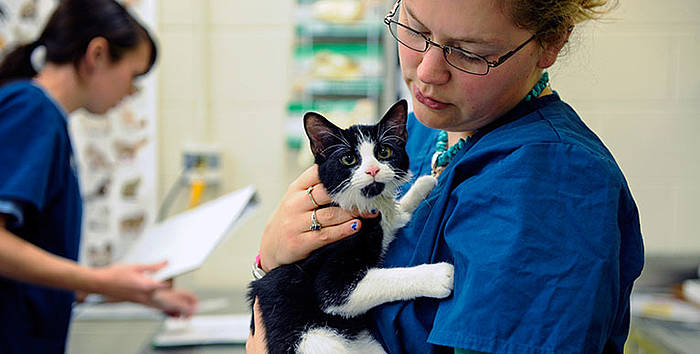 World Rabies Day is Saturday, Sept. 28, and the animal sciences department and Veterinary Diagnostic Laboratory at NDSU encourage pet and horse owners to make sure their animals have up-to-date rabies vaccinations.

“Vaccination for domestic pets is the key to rabies prevention,” said Neil Dyer, director of the Veterinary Diagnostic Laboratory and professor of animal sciences at NDSU. “The virus is always smoldering out there; it never goes away.”

Rabies is a virus that affects the central nervous system of mammals, causing disease in the brain and death. It is transmitted through the saliva of an infected animal—often through a bite.

Dyer said the U.S. has a good rabies prevention system, which includes rabies vaccinations for domestic animals. But the rabies virus has not been eliminated because of its ability to adapt.

According to the Centers for Disease Control and Prevention, most rabies cases reported in the United States before the 1960s were domestic animals, such as dogs. Today, 90 percent of reported rabies cases are wild animals.

That’s because the virus has adapted to local wild animal populations—primarily skunks in eastern North Dakota and northwestern Minnesota. Then it spills into the domestic animal population through animals that are not vaccinated.

Bats also are common carriers. “With cooler weather on the way, bats will be attracted to the warmth of indoor spaces,” Dyer said.

There is no treatment for animals exposed to rabies, so that’s why it is important to vaccinate, said Lisa Christenson, assistant professor of practice in animal sciences.

Rabies vaccine is available for cats, dogs, ferrets and livestock. It can be cost-prohibitive to vaccinate livestock, but Dyer recommends vaccinating horses since they are typically kept in rural areas where they may come into contact with skunks.

The vaccine is effective for one to three years, depending on the type. A veterinarian can administer the vaccine and provide documentation.

In cats and dogs, unexpected aggressive behavior and paralysis are common symptoms of rabies. Cattle tend to bellow and drool excessively and act as though something is stuck in their throat. If you believe you see signs of rabies, avoid handling the animal. Isolate it and contact your local veterinarian or animal control.

Wild animals that demonstrate unusual behavior, such as approaching you during daylight, may have rabies. Steer clear of them and contact animal control.

Humans exposed to rabies can be treated. The CDC reports that the treatment is nearly 100 percent successful.

The CDC recommends washing any animal bite immediately to prevent infection. In animal studies, washing the wound also has significantly decreased the likelihood of rabies. Rabies travels by nerve tissue from the bite site to the brain, so people who are exposed to rabies have time to seek medical treatment before symptoms develop. More information is available at www.cdc.gov/rabies.

The North Dakota Veterinary Diagnostic Laboratory at NDSU and the North Dakota Department of Health are the two labs in the state that test animals for rabies. Telephone and fax numbers as well as the mailing and courier addresses for NDSU’s diagnostic lab are available at www.vdl.ndsu.edu/vdl/contactus.aspx?rf=labinfo&sf=con.

Suggest a story that highlights NDSU as a land grant university. We may not use every suggestion, but we'd like to hear from you.