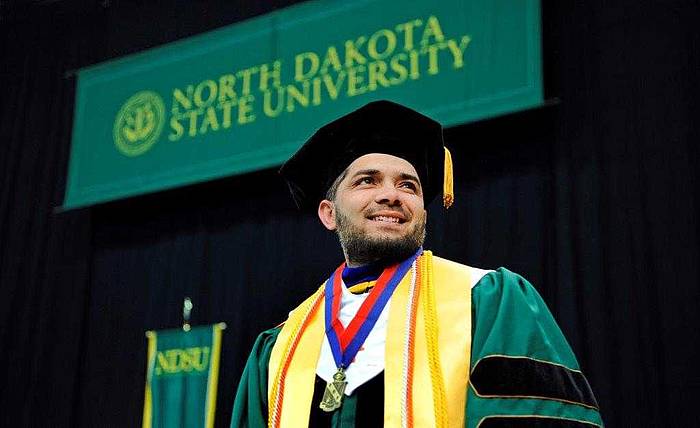 Sajid Asif leaves NDSU with quite a resume. He graduated this summer with a doctorate in electrical and computer engineering.

Working under the guidance of interim department chair Benjamin Braaten and Daniel Ewert, emeritus professor, Asif’s dissertation focused on developing a new technique for a leadless pacemaker. With the support of a multidisciplinary team, he developed a novel pacemaker, which receives radio waves and harvests energy to pace the heart – without any leads or batteries. A prototype leadless pacemaker was successfully tested on ovine models and leadless pacing using this novel method was demonstrated for the first time.

Asif’s scholarly work appears in 43 papers, including 27 peer-reviewed conference proceedings and 16 peer reviewed journal articles. He has filed one patent on his work and submitted an invention disclosure at the NDSU technology transfer office. He also has presented his work at major international conferences and was invited speaker at many other events.

“I think the biggest impact I made at NDSU is to initiate and reinstate the dormant chapter of IEEE-Eta Kappa Nu, Gamma Tau chapter. This chapter was dormant for more than two decades and now, we have an active chapter with about 30 members, eight officers and regular activities,” he said. “Our chapter recently won the ‘Key Chapter Award’, which is evidence of the great work that our officers have performed since the chapter got reinstated.”

Asif, who is originally from Attock, Pakistan, also was chair and vice chair of the Red River Valley Section of IEEE. He was inducted into NDSU’s Tapestry of Diverse Talents in 2016 and recently received the NDSU College of Engineering’s Graduate Research Assistant of the Year 2017 Award. In addition, he is the recipient of the prestigious IEEE Antenna and Propagation Society Doctoral Research Award in 2015. Furthermore, Asif also received the competitive NSF-EPSCOR Doctoral Research Assistantship (2015-2017), and a regional IEEE Outstanding Student Award (2016).

Asif was a finalist of the Three-Minute Thesis competition and earned first place in the 2017 NDSU Innovation Challenge Award. He was inducted into Tau Beta Pi, an engineering honor society; IEEE-Eta Kappa Nu, IEEE honor society; and Golden Key, an international honor society.

“Get involved and embrace the opportunities that life offers you, as you never know what doors they will open for you in the future,” Asif said. “Hard work, perseverance and self-commitment is a must, if you want to be a high achiever.”