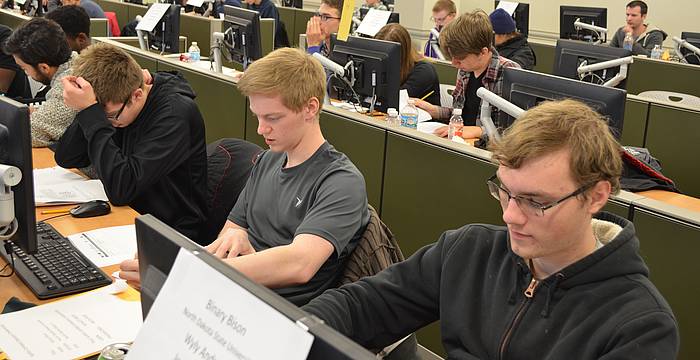 At the DigiKey programming contest, NDSU teams took first and second place. This is only the second time in the competition’s history that both first and second place were won by the same school. Buchholz and Bernard were members of the first-place team. Juniors Riley Conlin and Ajay Brown and sophomore Wren Erickson earned second. The teams brought home nearly $10,000 in prizes for themselves and the university.

“Our programming teams have had a fabulous competition season,” said computer science professor Anne Denton, who coached the Mech Mania, DigiKey and programming constest teams. Denton also serves as the adviser for the student Association for Computing Machiney chapter, which sponsors participation in the events.

On the national level, two NDSU students on the National Cyber League team that competes in a contest of cybersecurity challenges went into the pre-season games ranked 24th and 26th nationally, out of 3,176 competitors.

“These contests give students more than just bragging rights,” said computer science assistant professor Jeremy Straub, who is coaching the National Cyber League team. “Being able to show that you were the best in the region or the best in the nation can be a real ‘leg up’ when students are trying to get their first job, when graduating.”

The DigiKey contest is sponsored by regional employer DigiKey, as part of the company’s recruiting efforts. The National Cyber League provides scouting reports on players to prospective employers. Contest participation demonstrates students can appropriately apply the material learned in classes.