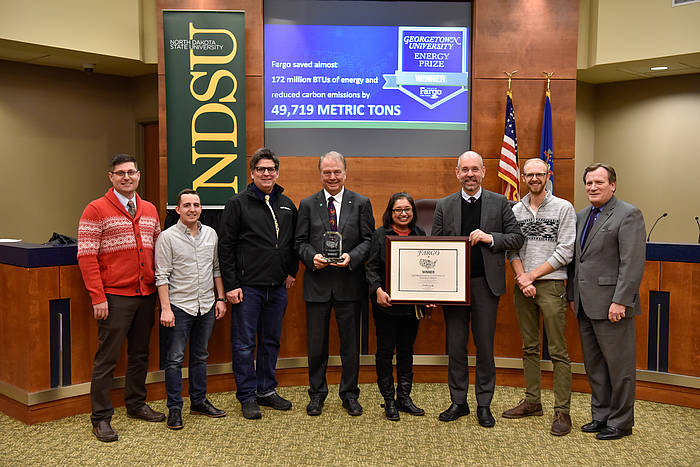 Two years ago, Fargo had limited energy conservation programming and a community that said it wanted that to change.

The city of Fargo, North Dakota State University, Cass County Electric Cooperative and Xcel Energy pulled together to improve the city’s energy efficiency and to compete in the Georgetown University Energy Prize competition, which offered a $5 million prize.

Fargo won the competition in December 2017, reducing energy consumption by 6.8 percent during 2015 and 2016 and implementing innovative strategies that will serve as a national model.

“Fargo built an extraordinary program that brought together the community through partnerships, leveraged local assets and utilized a strong benchmarking system,” said Uwe Brandes, energy prize executive director, at a Dec. 18, news conference. He noted that Fargo’s strategies were innovative, replicable and scalable.

“The energy prize competition has been a catalyst and change-maker for our community,” Srivastava said. “Ultimately, it was people power, the pulling together of community efforts and active partnerships that have resulted in savings. I look forward to seeing how Fargo continues to build on these efforts and hope that other communities are inspired by what we achieved from humble beginnings.”

eFargo game
Many energy-efficiency practices are relatively easy, such as running the dishwasher at non-peak times or switching from lightbulbs to LEDs. Yet past research has shown that people are reluctant to adopt these practices even though they will directly benefit through lower utility bills.

Srivastava wanted to test whether gaming would affect behavior. The team developed the eFargo game that included educational content, energy-efficiency tasks and prizes, such as gift certificates to home improvement stores. More than 300 residents participated over eight weeks.

K-12 Challenge
eFargo challenged Fargo and West Fargo K-12 schools to reduce energy consumption over six weeks. eFargo provided materials to help teachers incorporate energy-use concepts into the curriculum and maintained a dashboard, so schools could see whether their actions, such as turning off lights and unplugging vending machines, were having an effect.

Fargo’s Roosevelt Elementary won the challenge, reducing the school’s energy consumption by 29 percent. They achieved this by educating students about energy use and empowering them to make changes through their knowledge and creativity. The program is being replicated for other school districts across the state.

In addition to the students’ work, school administrators were committed and supported staff and student efforts to reduce energy consumption.

High energy-efficiency house
eFargo has partnered with the city of Fargo to design and build four affordable, high-efficiency houses to demonstrate these types of homes are attainable. NDSU architecture students have designed the houses and secured permits. Construction will be scheduled when a partnership with a builder has been finalized.

The prize for winning the competition is $5 million in financing for the city to continue its efforts. The prize also includes workshops and educational opportunities for the community.

“We have a responsibility, now as a national leader, to imagine an even better future with even more savings,” Srivastava said.