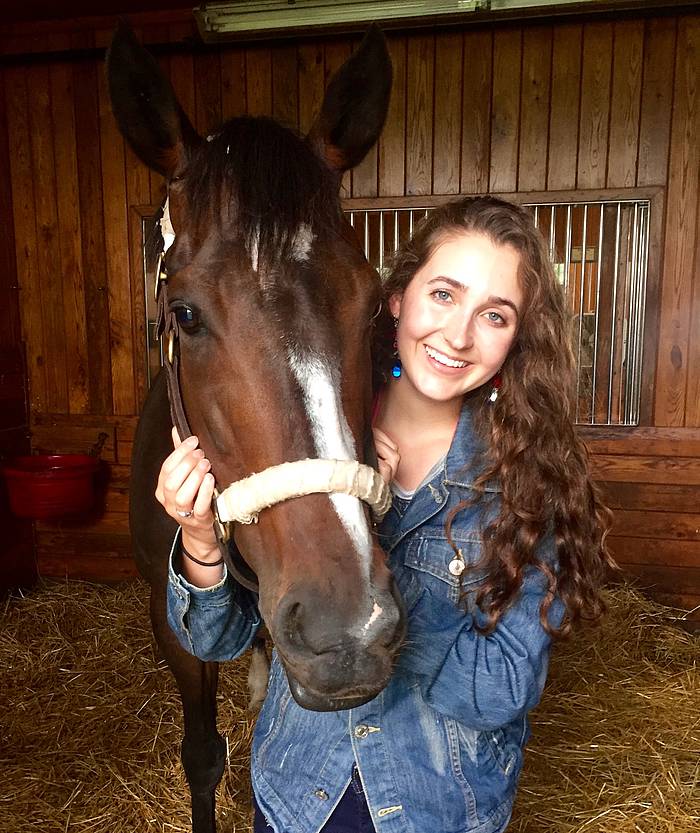 NDSU alumna Annise Montplaisir aspires to have a career in horse racing, and she’s off to an impressive start nearly right out of the gate.

The 2017 graduate has been accepted into the prestigious Godolphin Flying Start management and leadership program that specializes in the international thoroughbred racing and breeding industry. The program was founded by Sheikh Mohammed bin Rashid al Maktoum of Dubai.

Each year, it accepts only 12 applicants from around the world.

“The magnitude of being selected is something that won’t completely hit me until I start the course. It’s just starting to sink in,” said Montplaisir, “This a program that I had my sights set on since I was 12 or 13 years old.”

Montplaisir earned her bachelor’s degree with a double major in management communication and international studies, and she minored in Spanish. She credits her NDSU experience for giving her a firm foundation for success.

“NDSU was so flexible for my education,” she said, noting she also was a member of  NDSU’s hunt seat equestrian team for four years. “I was able to have a primary major, secondary major, a minor, an internship and I studied abroad. I really feel that I got the most well-rounded education that I could have asked for – it really set me up well.”

Montplaisir, who grew up a few miles north of Moorhead, has two horses of her own: a thoroughbred named Cyclone Larryand a quarterhorse named Misty. Cyclone Larry played the famous Triple Crown winner in the 2010 Walt Disney Pictures movie “Secretariat.”

“I don’t even remember how I fell in love with horses,” said Montplaisir, who currently interns at the historic Mill Ridge Farm of Lexington, Kentucky, where she is learning about the breeding, raising, yearling sales preparation and auction aspects of the industry. “I really like the diversity and global aspect of the sport of horse racing. It’s known worldwide and there is a wide array of people working in thoroughbred racing.”

The two-year Godolphin program is similar to a master’s degree and has a mission to train talented applicants to become leaders who contribute to the success of the thoroughbred industry.Training takes place at locations in Ireland, United Kingdom, the United States, Australia and Dubai.

The program says 50 percent of its graduates are managers or CEOs on five continents, working in media, racing, breeding, bloodstock, sales, consulting, veterinary medicine and marketing.

Montplaisir is one of four Americans accepted for this year’s training class. Other class members are from the United Kingdom, Ireland, France and Australia.

“I’m excited. We all will bring different philosophies, perspectives and experiences to the table,” she said. “It will be fun.”

Montplaisir begins her classes at the Kildangan Stud facilities in Ireland on Aug. 13.