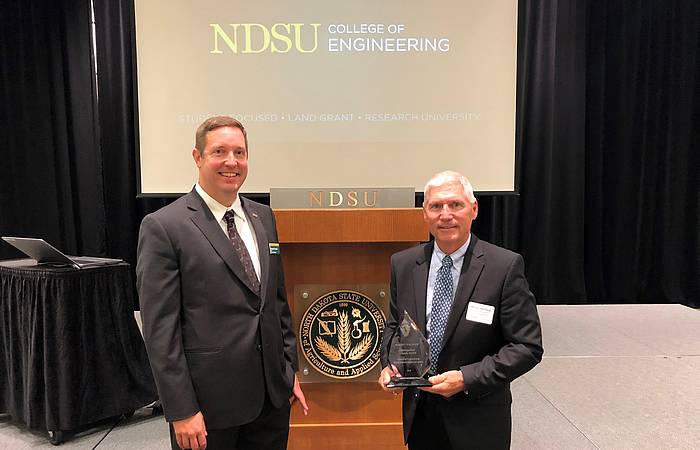 Warren Walhaug’s longtime petroleum industry career has taken him from the bayous near New Orleans to the mountains of Iran, before finishing where it all began, on the plains of North Dakota, developing the state’s oil resources. Now he has been honored with the 2018 College of Engineering Distinguished Alumni Award.

Walhaug, BS ’82, civil engineering, didn’t plan on returning home to North Dakota. He was working for Shell on a $40 billion project in Kazakhstan when his father died in 2012. While home for the funeral, Walhaug decided to drop off his resume at Hess Corp.’s Minot office. He quickly received a call and was hired as director of infrastructure, a position he held until his retirement in 2017.

In the process, Walhaug became the third generation of his family to live on the 110-year-old farmstead near Palermo, North Dakota. He grew up farming about an hour west of Minot. However, he was intrigued by hydraulics and building structures so he pursued engineering. He earned an associate’s degree from North Dakota State College of Science in 1973.

His first overseas assignment was in Iran in 1976. He remembers beautiful mountain valleys and sharing tea with village elders. That all changed with the Iranian Revolution. Walhaug was the last member of Harza Engineering to leave the country.

“It was a crazy time,” Walhaug said. “The last one to leave literally turned out the light and locked the door.”

Walhaug returned to North Dakota and, as an older-than-average student, earned a bachelor’s degree in civil engineering from NDSU in 1982. He was a member of the Tau Beta Phi Honor Society and the concrete canoe team. His experiences at NDSU helped shape the rest of his career.

“The faculty helped prepare me for the challenges I would face,” Walhaug said. “Aside from the technical expertise, I also improved my communication skills and learned how to be flexible.”

Seventeen of the next 31 years, with Shell, were spent overseas in places like Cameroon, Kazakhstan and Nigeria, where Walhaug took up racing sailboats. He mastered the art of racing a 16-foot Hobie Cat sailboat.

With his wife, Colleen, as his “reluctant crew,” Walhaug raced throughout Europe. The couple were European grand master champions in 2008 in Walhaug’s age class. He still enjoys global sailing competitions, along with ranching in North Dakota, spending time with his grandchildren in Alabama and skiing in Montana. He remains connected to NDSU through philanthropy and volunteer service to the College of Engineering Advisory and Advancement Board.

The College of Engineering Distinguished Alumni Award program was established in 2007 as a way to recognize accomplishments of outstanding alumni and provide an opportunity to showcase their talents with students, faculty and the university community.