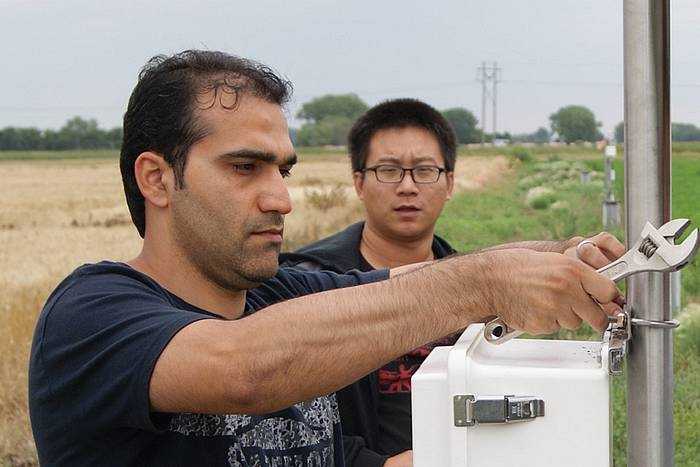 Water is a critical issue for North Dakota. Farmers want precipitation and snowpack information; people living along rivers want data on snowmelt and flood potential; and everyone is affected when a drought hits. That’s why Xuefeng Chu, ND EPSCoR-funded researcher with the Center for Regional Climate Studies and professor in the NDSU Department of Civil and Environmental Engineering, has focused his attention on the unique cold-climate hydrology of North Dakota.

“We’ve been able to develop specialized models that incorporate three levels of detail, from micro (at an individual pothole) to macro (for an entire river basin like the Missouri),” Chu said. “The models consider all aspects of hydrology, from precipitation to snowpack, snowmelt, and runoff, to the extremes of floods and droughts.”

The models are built, and then calibrated and verified against historical data from extensive field observations at sites in North Dakota.

“There are many hydrology models,” Chu said, “but most models don’t account for the hydrologic dynamics of the prairie potholes in our region.”

Another major improvement in our models, according to Chu, is the impact of the cold climate.

“For example, the Corps models used for the FM Diversion don’t account for the detailed processes associated with snowpack or snowmelt,” he said. “Both have a significant impact on flooding potential for the Red River Basin.”

The “real-world” emphasis is incorporated into the research by Chu’s graduate students. Ning Wang is modeling at the mesoscale level, tracking hydrology by event, day and hour. His focus has been how potholes influence the hydrologic processes, adding in temporal scales and different spatial resolutions to refine the models.

Mohsen Tahmasebi Nasab, who has been supported by ND EPSCoR throughout his Ph.D. program, has focused his research on macroscale models, looking at how climate changes impact the snowpack and surface runoff, for example, in the Missouri River Basin.

“If the climate predictions are accurate,” he said, “the Northern Great Plains may experience an average temperature increase of seven degrees Fahrenheit during the next 100 years. That will change the water resources available in the state, and impact the state’s agriculture as well.”

Lan Zeng’s emphasis is on improving the current Soil Water Assessment Tool (SWAT) by incorporating new algorithms to account for the influence of depressions (or potholes) on hydrologic processes in watersheds.

This summer, the students and Chu will be heading out to collect more data from the various sites around the region. Each site, powered by a small solar array, provides a wealth of information on precipitation, temperature, and snow depth. A river surveyor system is used to measure the topography/bathymetry of a lake or pothole, as well as flow velocity profiles of rivers. In addition, soil sensors at different depths installed in crop fields provide insight into the moisture content and temperature fluctuations.

“Our research goes beyond the theoretical,” Chu said. “Our goal is to develop hydrologic models that provide better answers for our state water challenges, and that can be useful for many watershed areas, especially those in cold climates.”

As the models are refined, they can not only inform people throughout North Dakota, but researchers across the country.

This article originally appeared in the May 2019 ND EPSCoR Newsletter.