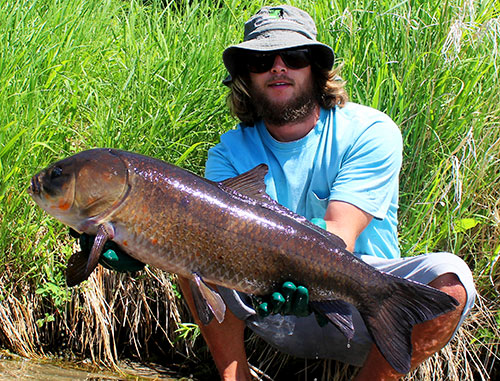 The studypublished in Communications Biology documents several individuals more than 100 years of age, with one at 112 years, which more than quadruples all previous age estimates for this species. In addition, many populations were documented to be 85-90 percent comprised of individuals more than 80 years old, suggesting unsuccessful reproduction since the 1930s.

In order to determine the age of the fish, the team employed a relatively new approach utilizing thin-sectioned otoliths (stones from the inner ears of the fish) and carbon dating of a sequential set of microsamples from individual otoliths. Otoliths are present in the ear anatomy of most fish species and they grow continuously as a fish ages. Traditional methods of aging fish by counting rings on scales and fin rays (similar to the process of aging trees) placed a typical age for Bigmouth Buffalo at 5 to 20 years.

Found in 22 states across the upper Midwest and into Canada, Bigmouth Buffalo have historically been a part of human culture. The Minnesota county and city name of Kandiyohi means “where the buffalo fish come;” the city of Buffalo, Minnesota, is named after the fish; and Lewis and Clark harvested them during their famous journey. The fish has been a commercially valued product since the 1800s and a fishery in the upper Mississippi Basin places a value on their harvest at more than $1 million annually.

While Bigmouth Buffalo were given special concern status in the 1980s and their harvest remains regulated in Canada, Bigmouth Buffalo harvest in the United States today is almost unregulated with no limits established in almost every state. Traditionally unpopular with anglers, the fish has rapidly become a premier target for bowfishers given legal changes in recent years that have allowed night bowfishing and an extended season that includes their vulnerable spawning period.