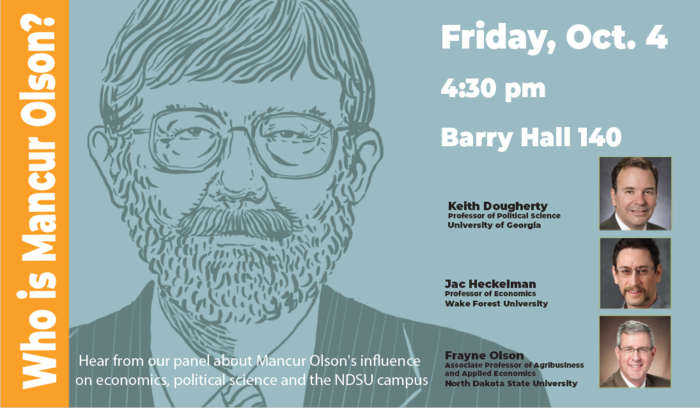 “Who is Mancur Olson? A Discussion of His Life and Legacy” will explore Olson’s ideas and their lasting impact on the world and the NDSU campus. The featured speakers include two former students of Olson and his nephew.

The event is free and open to the public. It is sponsored by the NDSU Center for the Study of Public Choice and Private Enterprise, the Challey Institute for Global Innovation and Growth and the Institute for Humane Studies.

“I’ve been studying Mancur’s ideas ever since I was a graduate student,” said Jeremy Jackson, director of the NDSU Center for the Study of Public Choice and Private Enterprise. “Through the connections Mancur Olson has to NDSU, I’ve come to know so much more about his story and how his North Dakota roots shaped his ideas. That’s why I’m excited to bring this event to NDSU and celebrate Mancur’s North Dakota heritage.”

Olson achieved acclaim for his work on special interest groups. His first book, “The Logic of Collective Action,” developed a theory of political science and economics that challenged the accepted wisdom of his day and shed light on why interest groups often prevail in policymaking. Olson’s pioneering research and leadership helped found the fields of public choice and new institutional economics.

Shortly after his death in 1998, The Economist said, “Had he lived, (Mancur Olson’s) theory of collective action might well have won him a Nobel prize in economics, though not a wholly uncontroversial one.”

After growing up on a farm near Buxton, North Dakota, Olson attended the North Dakota Agricultural College — today’s NDSU — where he earned his bachelor’s degree in economics in 1954. He studied at Oxford as a Rhodes Scholar before earning his doctorate from Harvard in 1963.

Olson served stints at the Air Force Academy, Princeton University and as the Deputy Assistant Secretary in the U.S. Department of Health, Education and Welfare. He joined the faculty of the University of Maryland at College Park in 1969, where he remained until his death.