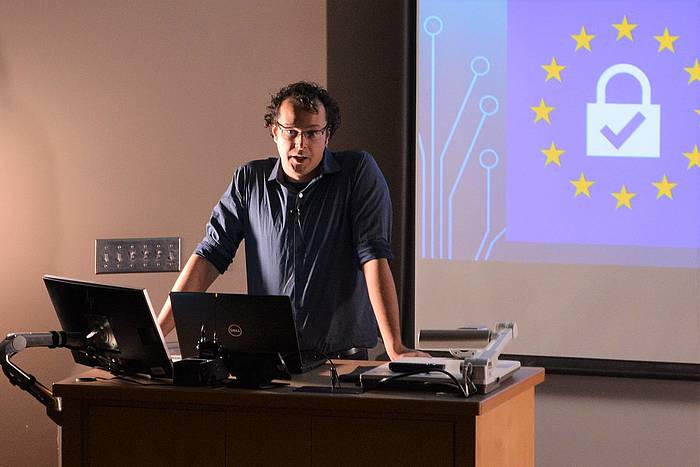 Regional cybersecurity professionals participated in a speaker series, hosted by the NDSU Institute for Cybersecurity Education and Research, for Cybersecurity Career Awareness Week Nov. 11-16. Cybersecurity career awareness week was proclaimed by Gov. Doug Burgum in North Dakota, and is sponsored nationally by the National Institute of Standards and Technology.

“The State of North Dakota recognizes that its educational institutions, at all levels, have a vital role in preparing students to enter the workforce where they will identify, respond to and protect its citizens from cyberthreats that may significantly impact individual and collective security and privacy,” according to Burgum’s proclamation. “Critical infrastructure sectors increasingly rely on information systems and technology to support utilities, financial services, energy, telecommunications, transportation, health care and emergency response systems.”

“Each presenter gave students a glimpse of a possible career path and explained how they could prepare, while at NDSU, to pursue a career in their respective area,” said Jeremy Straub, institute associate director and computer science assistant professor, who organized the speaker series. “The value of seeing where their educational pursuits can lead and the aspirational career choices that lay ahead cannot be overstated.”

There are many opportunities for NDSU students in the cybersecurity field. More than 300,000 cybersecurity jobs are open across the country, according to cyberseek.org. The U.S. Bureau of Labor Statistics reports that cybersecurity analysts earn $98,350, on average.

On Nov. 12, NDSU hosted speakers Joshua Bartholomew and Mike Saunders. Bartholomew is the founder of the Fargo-Moorhead InfoSec group and works as a cybersecurity analyst at RealTruck.com. Saunders is a principal consultant at Red Siege and has more than 25 years of experience in information technology and security.

NDSU hosted Air Force National Guard Maj. Daniel Sly on Nov. 13. Sly is responsible for base network actions in support of Remotely Piloted Aircraft operations, and intelligence, surveillance and reconnaissance missions. He has worked at Microsoft as a senior technical analyst and was actively involved in the development of several world-class business intelligence solutions that now serve as core Department of Defense network architecture.

“We greatly benefit from hearing firsthand stories and wisdom directly from the cybersecurity trenches,” said NDSU doctoral student and staff member Ben Bernard, who helped arrange several of the presentations. “All of our speakers had a unique background, perspective and role within the cybersecurity field.”

The presentations were recorded and will be available for viewing online.