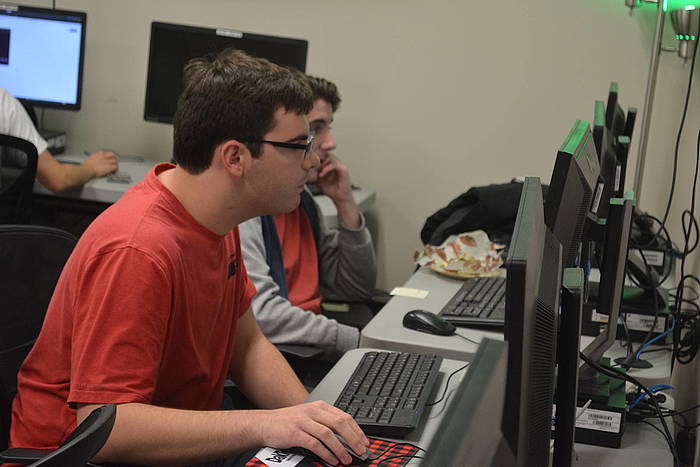 Three teams of NDSU students participated in the first Hivestorm cybersecurity competition. The new competition pits student teams against each other to secure Linux and Windows servers during a four-hour competition window. Each team is given servers that have misconfigurations and other issues that they must identify and remediate to secure them. This is a typical scenario for many information technology positions.

The event was hosted by the Center for Infrastructure Assurance and Security at the University of Texas at San Antonio and the Collegiate Cyber Defense Competition. According to its organizers, student participants learn about security, system administration, configuration and forensics.

“I think we all challenged ourselves by working on systems we weren’t familiar with,” said NDSU graduate student Brett Knecht. “The typical way you’d normally do things was blocked, so you’d have to find a creative way around.”

As part of the challenge, the teams had to identify and mitigate vulnerabilities in software and patching and detect and remove various malware. Each issue identified and corrected earned the teams points in the competition.

“There was definitely stuff that I could use in real life. It’s a really good way to learn,” commented NDSU graduate student Pann Ajjimaporn. “It’s a good way to apply what you learn in class. It’s a new type of competition, and I very much enjoyed it.”

Hivestorm is one of several cybersecurity competitions that NDSU students participate in for educational and workforce preparation purposes.  High-paying jobs await cybersecurity students, with cybersecurity analysts earning, on average, $98,350, according to the U.S. Bureau of Labor Statistics.