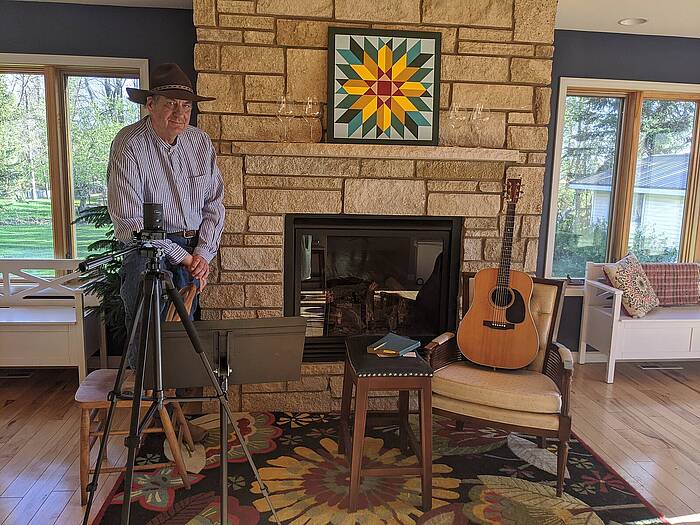 Tom Isern, University Distinguished Professor of history, is going online to stay in touch with his readers during the pandemic. Isern, who writes and voices a weekly column called “Plains Folk” on Prairie Public radio, is broadening his reach to the public through a half-hour Facebook Live production Fridays at 8 p.m.

At their residence near West Fargo, Isern and his wife, Suzzanne Kelley, NDSU Press editor-in-chief, have turned their sunroom and living room into the “Salon on Willow Creek.”

“I’m doing an online program called the ‘Willow Creek Folk School’ that is devoted to folksongs and life on the Great Plains of North America. It’s song and chat,” he said. “We use a Mevo to record and simultaneously stream to Facebook Live. The online venue is the Facebook page of Plains Folk – the name of my weekly column and associated enterprises.”

“Why do this now? Well, many years ago I made the rent by playing folk music gigs, and my interests in folksong and folklore became embedded in my teaching and research lives, too. In recent years I haven't done so much performing, but I feel like this is a part of my life I need to restore in the balance,” Isern said.

“I sense a resurging interest in folklife and real things among Americans going through the current crisis,” he said. “I'm old enough to remember the folkie movement the first time around, and fortunate still to be around for a resurgence. I'm not going to miss it.”